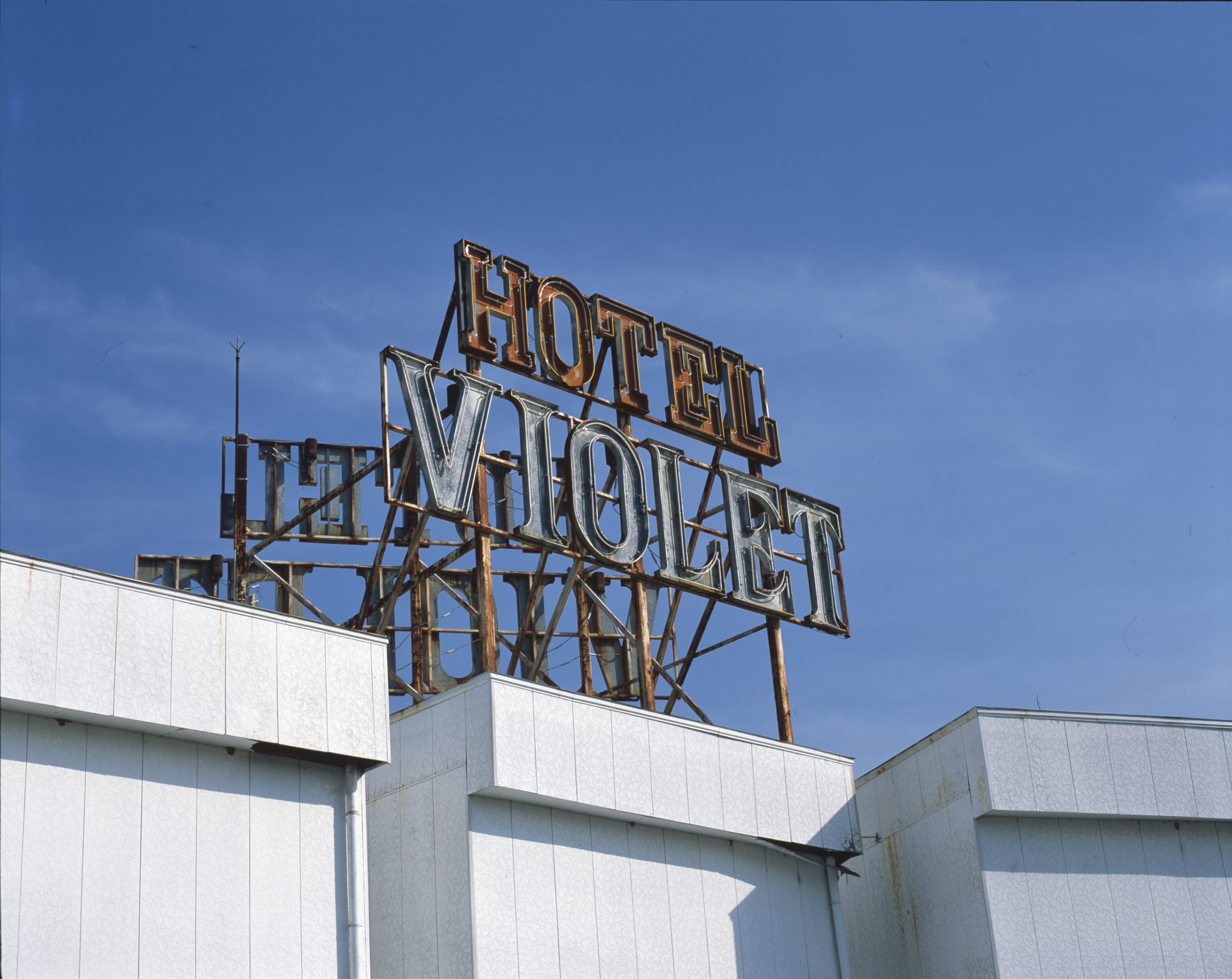 Around 25 to 45 minutes outside of central Takasaki in Japan’s Gunma prefecture lies a lonely cluster of eight to 10 love hotels. “Love hotels” are, as the name implies, a discrete hourly solution that’s existed for as long as people have needed privacy and intimacy.

Last summer, on one of his many long drives through the Japanese countryside, music producer and photographer Repeat Pattern happened upon this cluster of hotels. With only three or four remaining in operation, most of the others were shuttered and abandoned—claimed by the fading glow of Japan’s golden ’80s.

Finding allure in bygone ages frozen in time and doors left conveniently ajar (he does not break and enter), he made his way inside and explored this one yet to be captured by decay, vandalism, or other cameras.

In doing so, he caught a glimpse of the uncanny past and its fateful outcomes. Where the success of such a business hinged on an abundance of lovers both overt and secret. Where once vibrant exotic escapes from the rigidity of everyday life were now devoid of their luster. Yet another place where the human desires of the period were inevitably swallowed up by time and progress.

See more of Repeat Pattern’s work and follow along over at Ello. 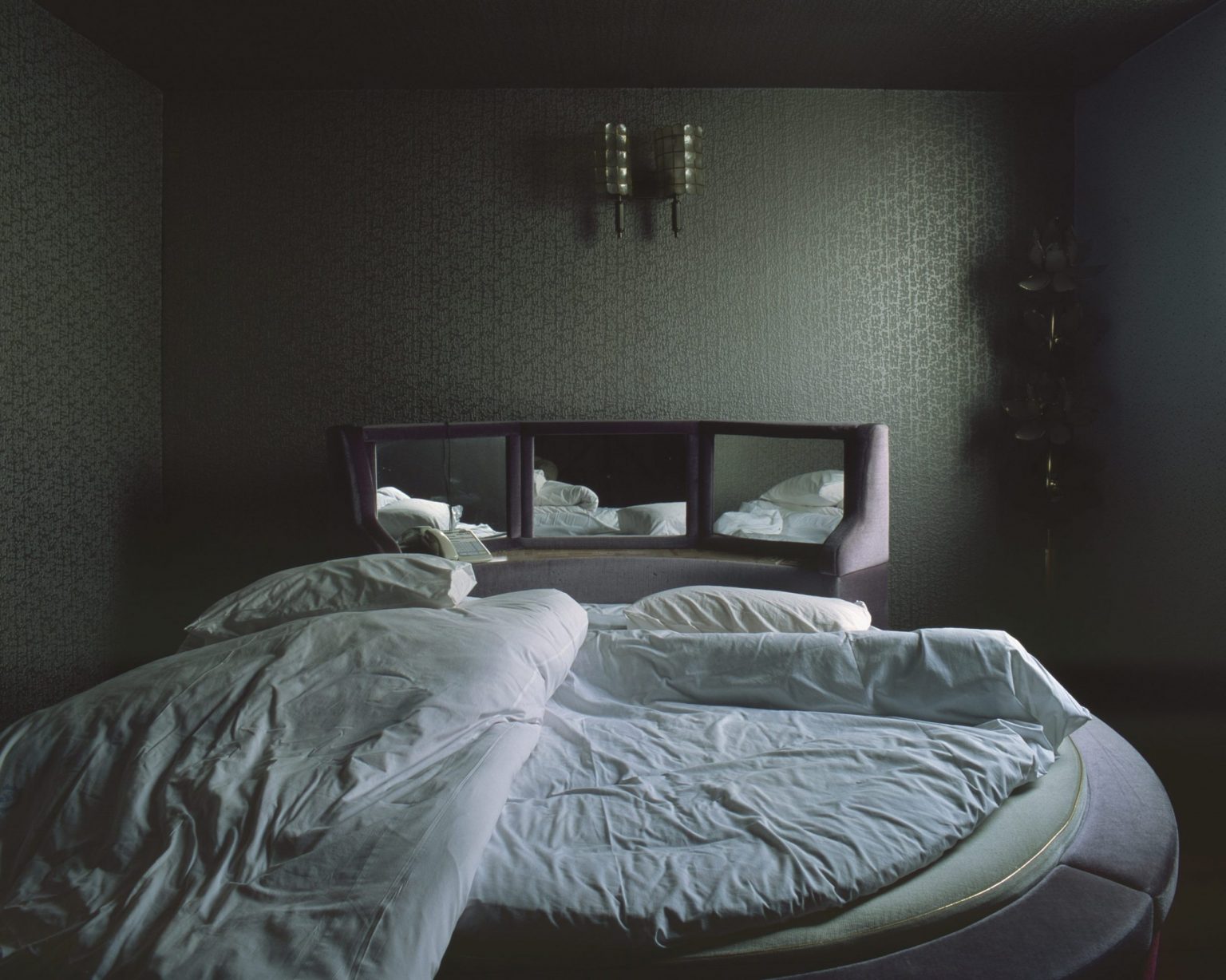 Right across from the window of this room was one belonging to another love hotel about five feet away, still in operation. The day I shot this photo, I spent maybe three hours in this one room alone. 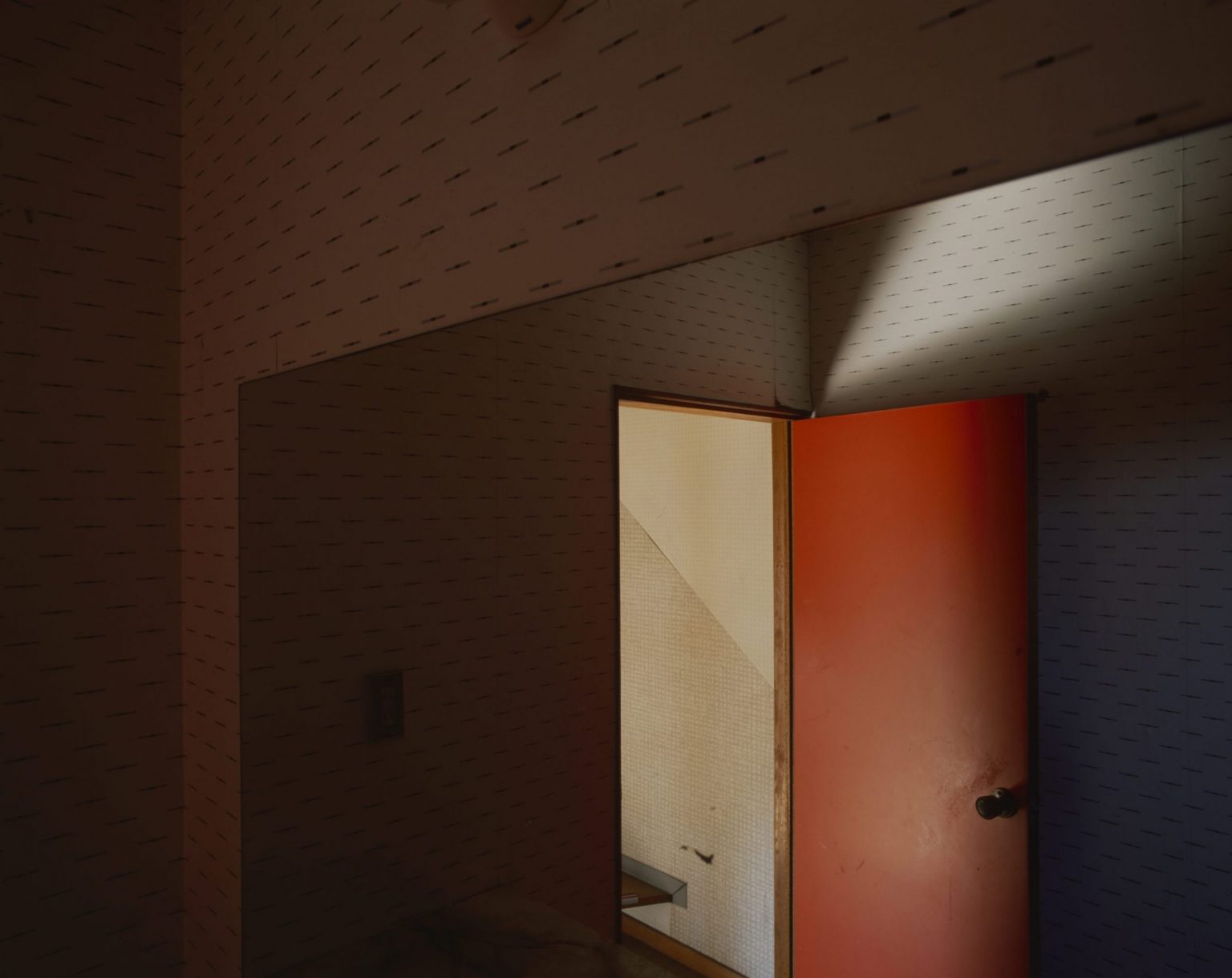 For so early in the summer, it was suffocatingly hot and humid. As sweat rolled down my neck, forehead and back, I lugged the camera and tripod around trying to get something decent. 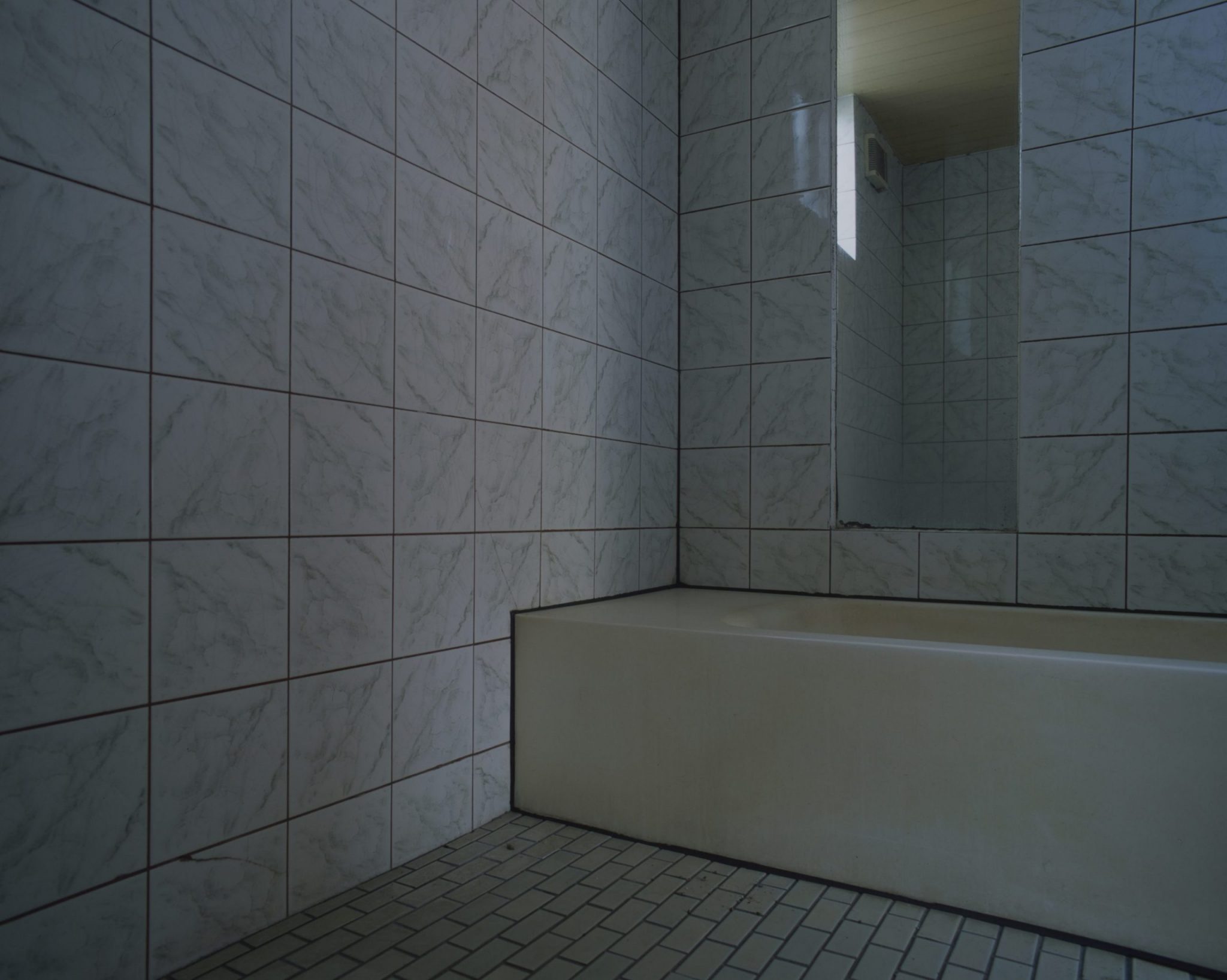 This room was very ordinary in comparison to the rest of the rooms with its middle-of-the-road ’80s, ’90s-ish American suburb vibe. 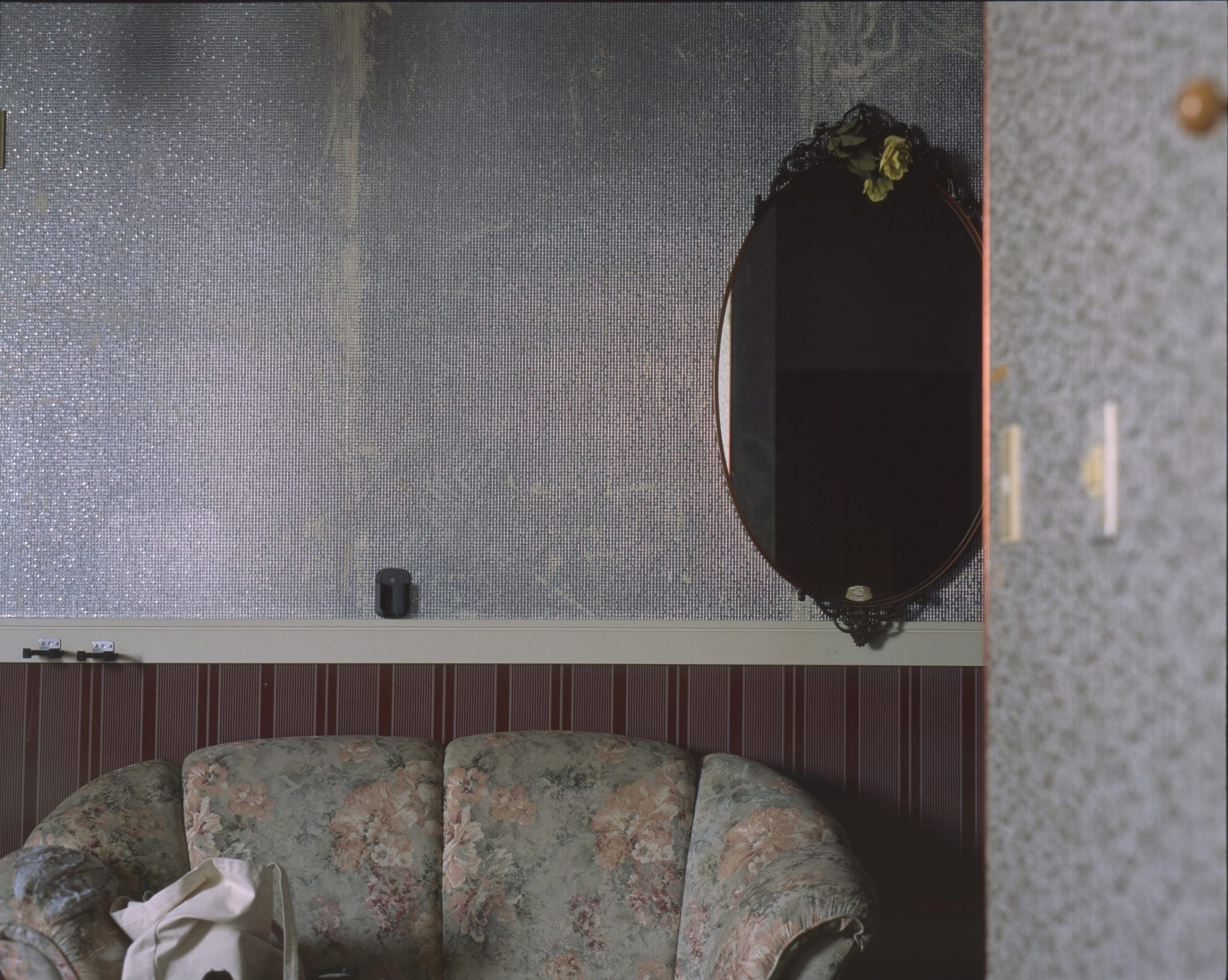 The second story lounge “sleeping” area of the too-at-home bathroom. I don’t really like this space, but still took this photo for some reason. 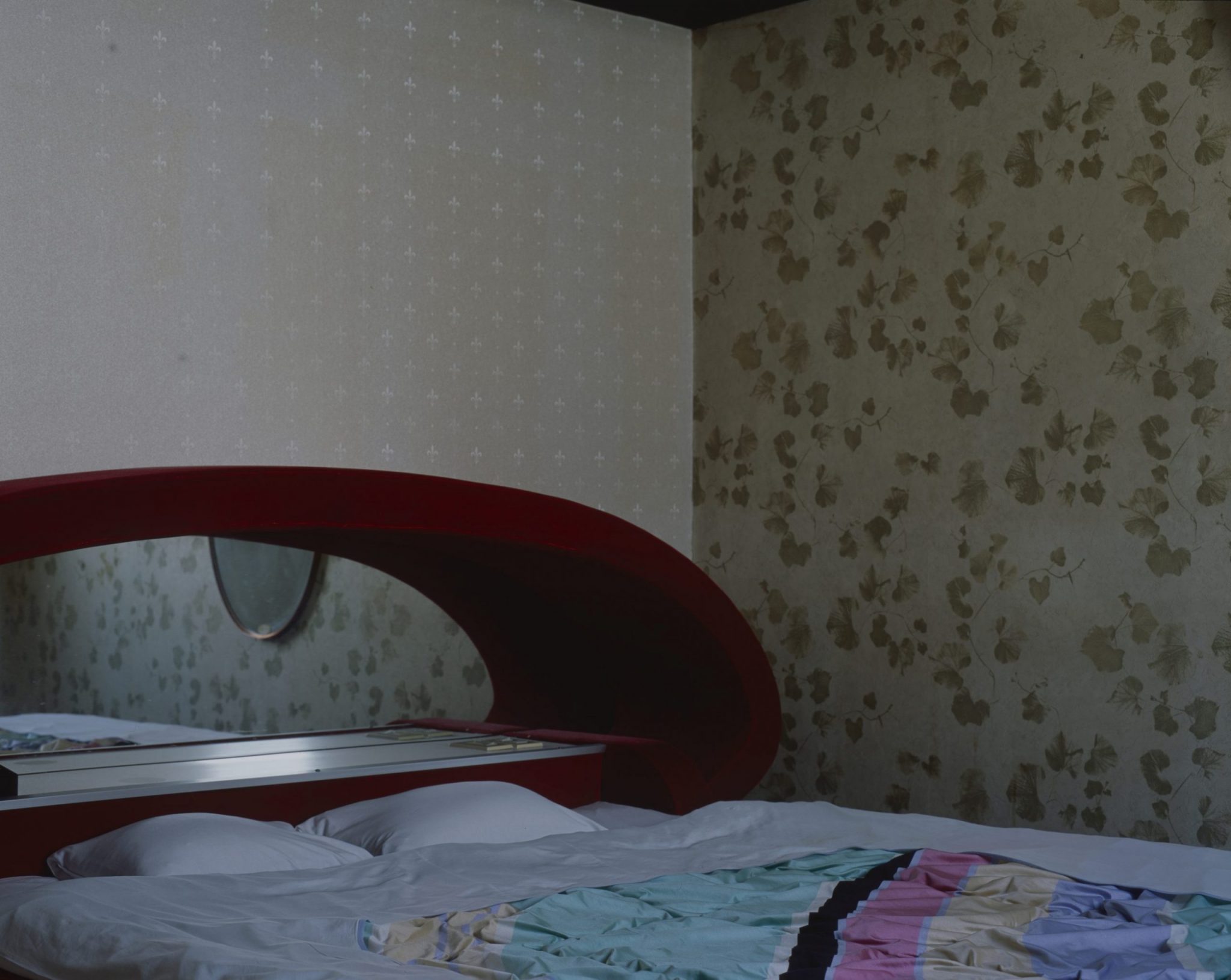 Nearby, I could hear the sounds of what I guess were staff cleaning a room while listening to high school baseball on the radio. These sounds would later disappear and be replaced by those of guests unreservedly enjoying their time in the hotel. 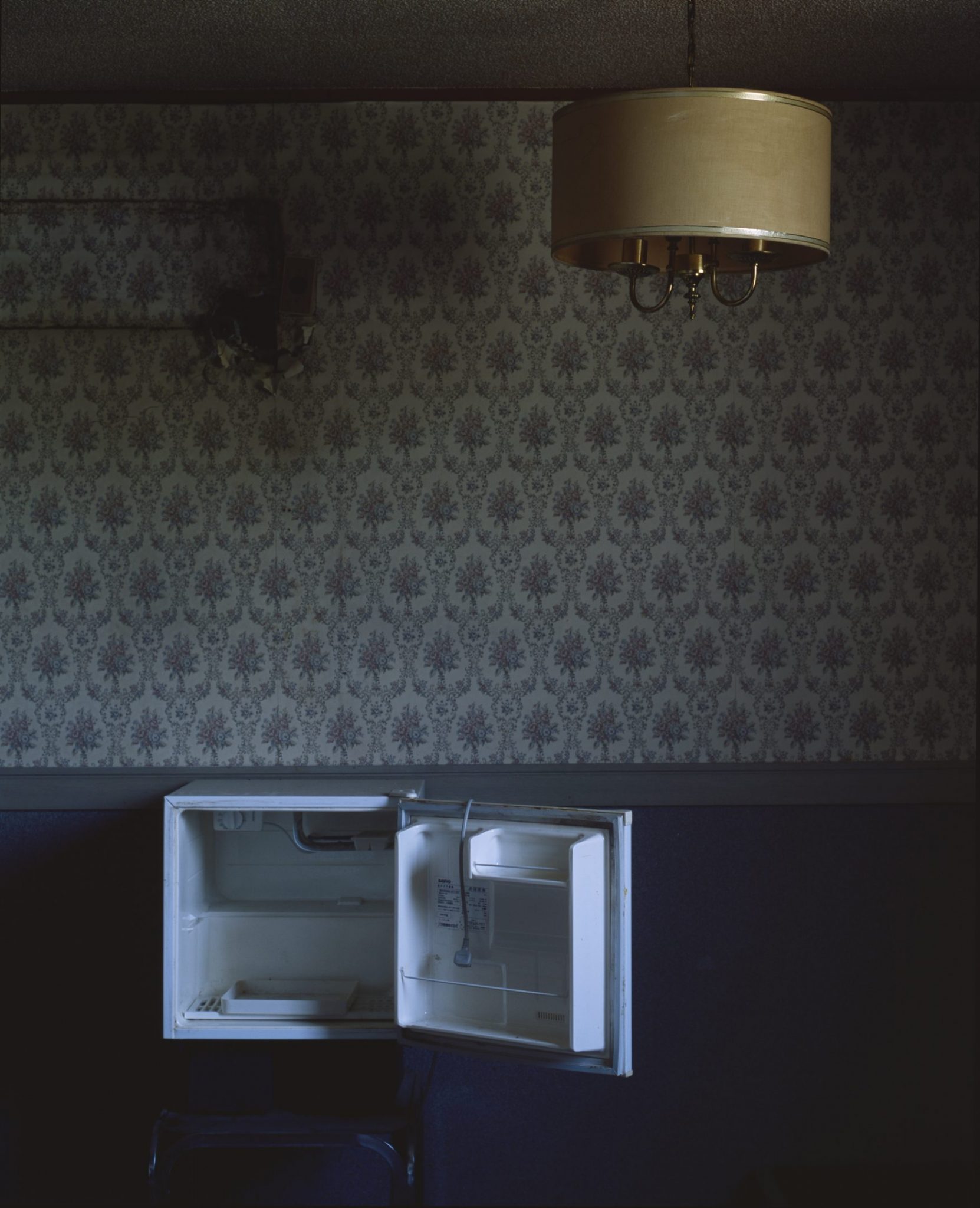 Where the others seemed to be pointing at some caricature of a Miami cocaine kingpin fantasy, I was left feeling all too at home in what I found here. 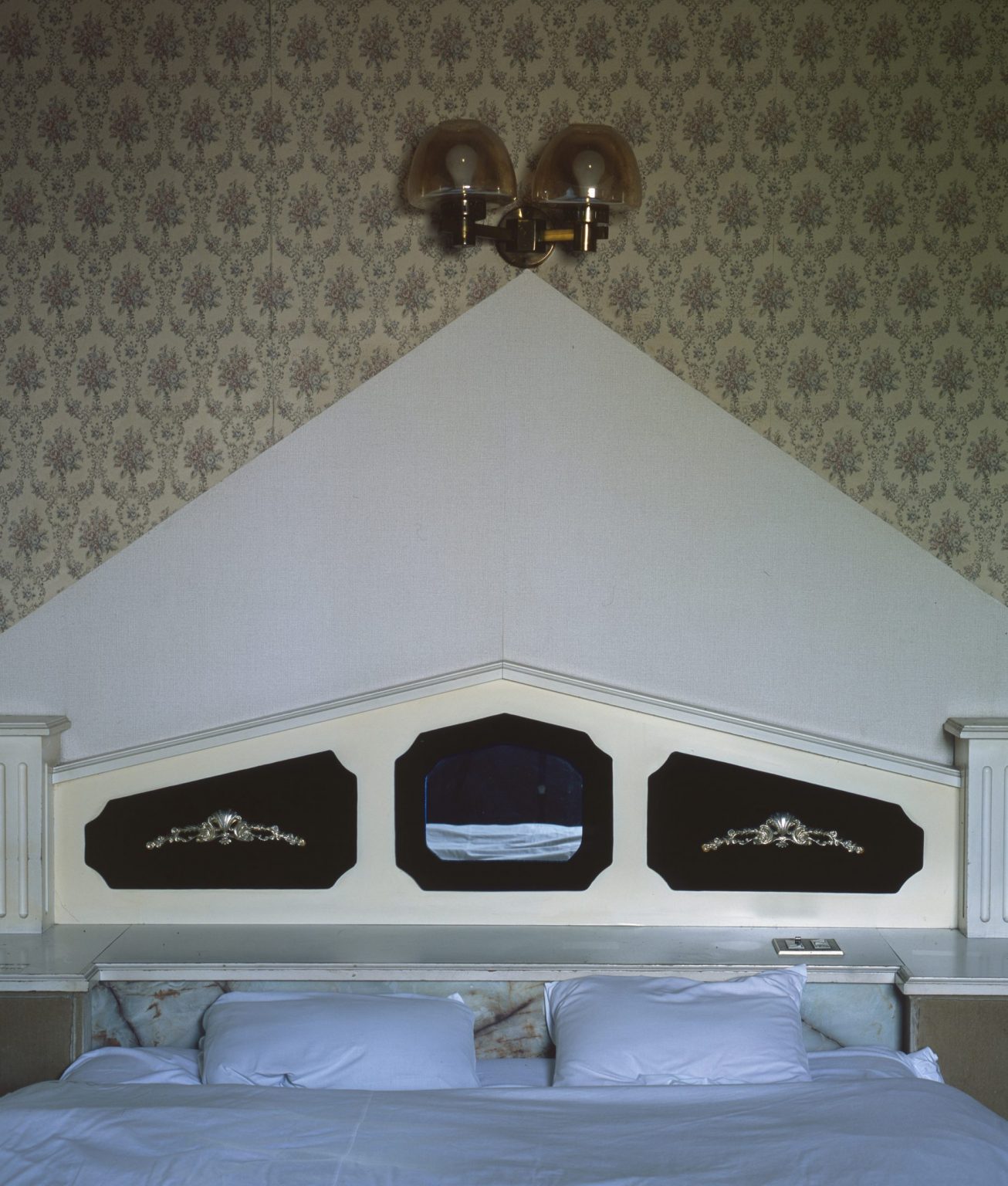 The doorways to this room and the bedroom were overcome with spiderwebs. The vending machines inside had been looted of their beer, snacks and money. 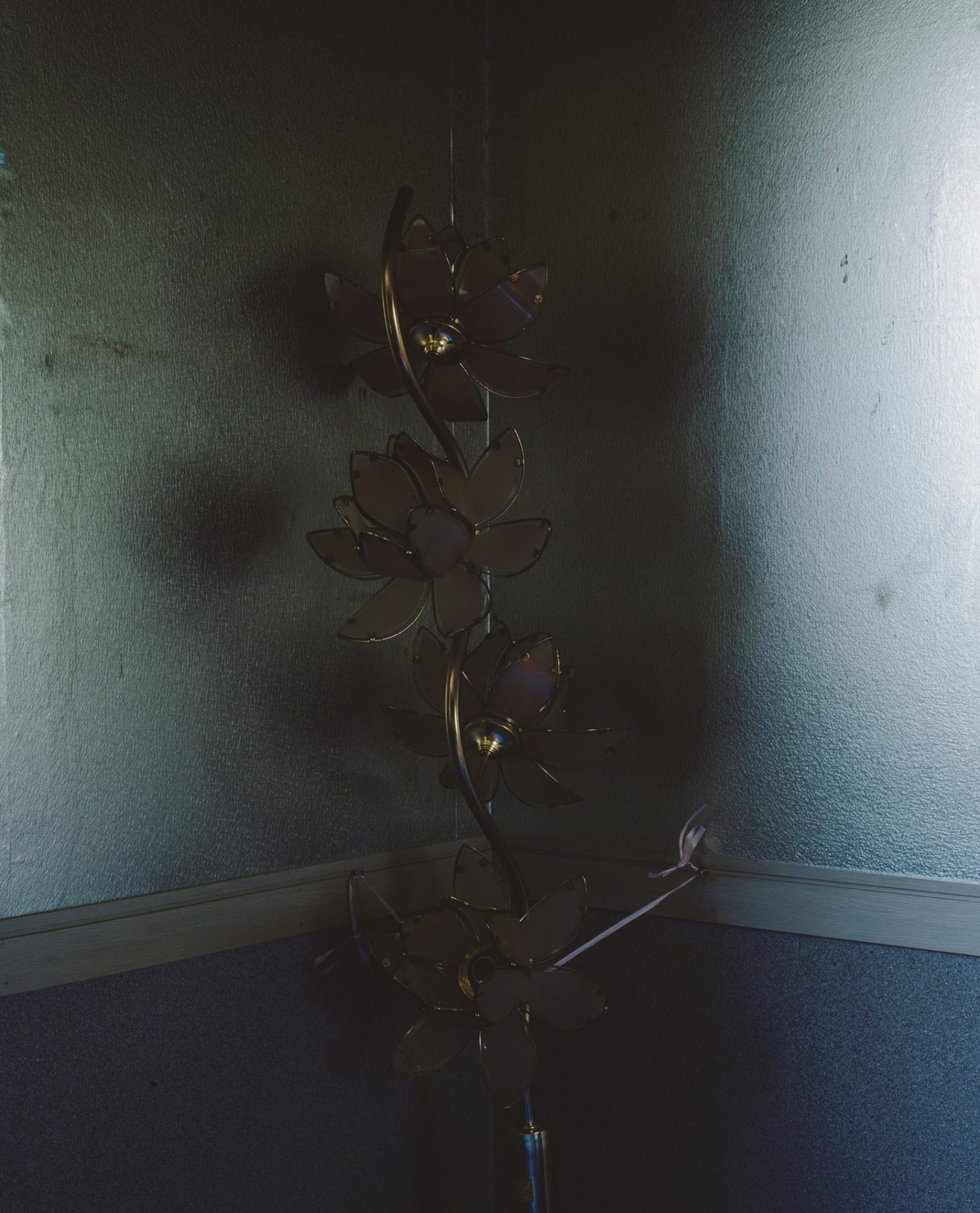 Both of these rooms were extremely charming with their tacky, kawaiso decor. They had mini raised karaoke stages complete with spotlights. 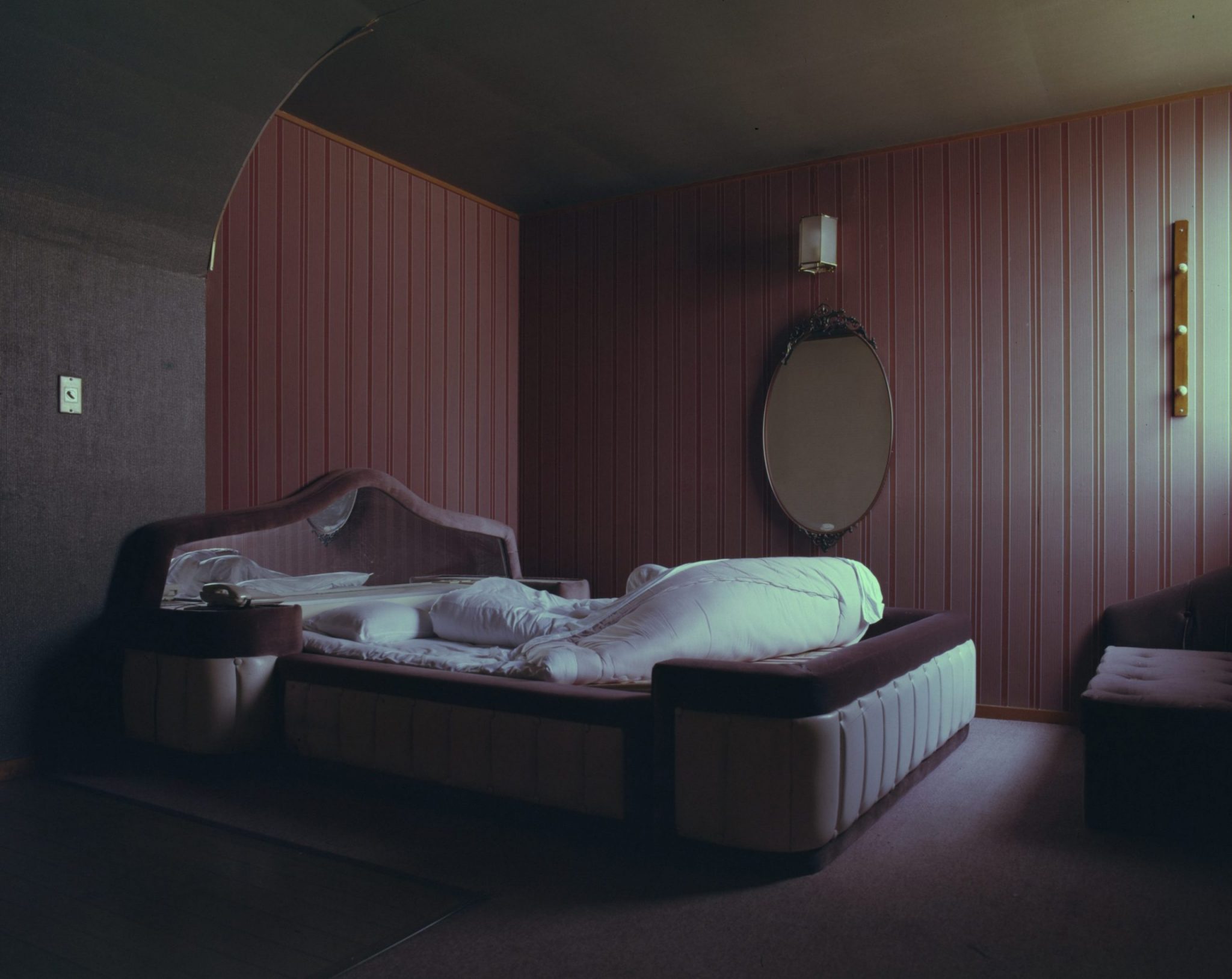 When I got to this room, the silence was broken again by the cleaning staff chatting in the other hotel. As I shot, their distant muddled voices kept me company, encouraging me to stay longer than I would have.

The doorways to this room and the bedroom were overcome with spiderwebs. The vending machines inside had been looted of their beer, snacks and money.