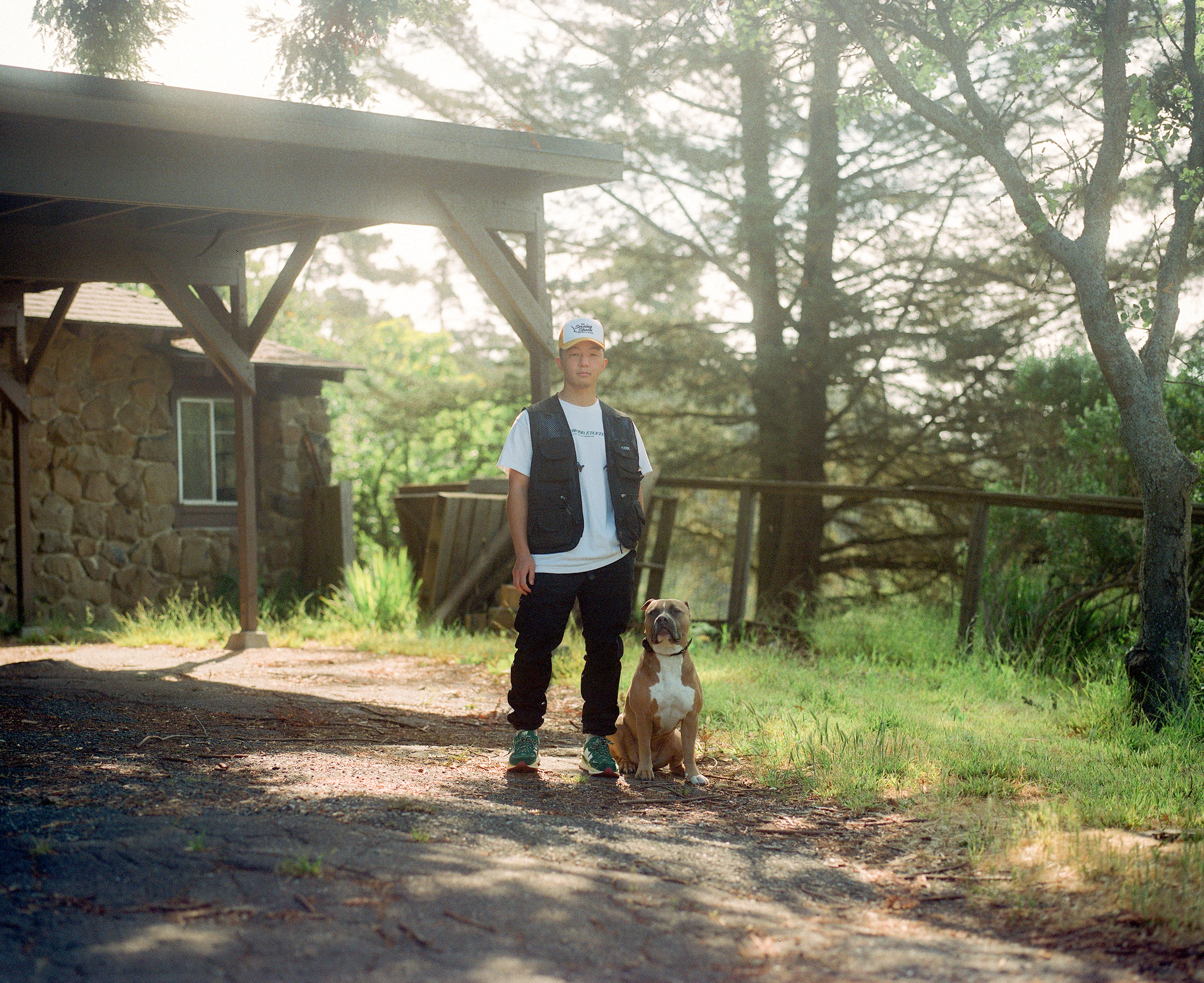 Kevin Wong, designer and art director, calls the whole of the Bay area his neighborhood. He grew up in the Richmond District in the northwest corner of San Francisco, but having a big family dispersed throughout the area and settling in Oakland for the last five years, it’s the collective diversity of the Bay that makes him appreciate it as a whole. That early exposure to all different types of people and ways of life made him someone whose first priority is the team — wins are only meaningful when they’re wins for everyone.

What the Bay is to Kevin Wong, South Central is to Kacey Lynch, creator of the apparel company Bricks & Wood, where Kevin now leads design and art direction. Kevin and Kacey met when they were both just getting started down the creative paths that led them to this point: releasing a Bricks & Wood New Balance shoe together.

The similarities in the neighborhoods that nurture us and the expansion of our worlds beyond those neighborhoods is the central idea behind the recent Bricks & Wood campaign surrounding the New Balance collaboration. It’s an idea Kacey’s had for a long time, that as Kevin put it, “It doesn’t really matter where you’re from, whatever neighborhood it is, wherever in the world you are, we all go through the same types of struggle and experience the same curiosity as a child.”

In the six-minute film “Jungle to Jungle” directed by Curtis Taylor Jr. accompanying the release, Kacey is depicted as a kid planting the Bricks & Wood New Balance shoe box, only for it to grow into a huge claymation tree with shoes on it. Plucking one of the shoes off the tree, Kacey dives into a fantastical world. “The idea is to let your creativity lead you to see the whole world beyond the houses and streets where you physically are,” Kevin explained.

When we spoke, Kevin attributed the creation of each element of the campaign to the entire Bricks & Wood team — Dani, Curtis, Franco, and John. “This was a big team moment. Not one of us just did everything. Really, everybody on the team executed everything.” It took me asking specifically about his work on the campaign before he added, “My role was in the ideation and design that brings these things together, and on extra finishing pieces.” He didn’t once put his name to any individual part, though Kevin is the graphics and apparel designer behind most of the products Bricks & Wood has released over the past few years — even before he officially joined the team.

“It doesn’t really matter where you’re from, whatever neighborhood it is, wherever in the world you are, we all go through the same types of struggle and experience the same curiosity as a child.”

In college in Tacoma, Washington, Kevin majored in general business, but his interests were grounded in streetwear. As a student, he picked up an internship at eTc Tacoma, a lifestyle brand that started out in 2014 as a curated shop created by Umi Wagoner and Perris Wright. Kevin was working the store, sweeping the floor, doing whatever was asked of him. “I was stoked to be doing just that and then Umi and Perris asked me to make graphics to be printed on tees.” Still in college, he remembers sitting outside of a Starbucks and pirating Adobe Illustrator off of Pirate Bay. “Everything I know was self-taught, DIY, YouTube tutorials for figuring stuff out as we were making it,” he said, “My education in visual design and graphic art is rooted in streetwear.” Eventually the shirts he designed sold so well that eTc hired him as the growing brand’s graphic designer. “I think that was the moment when it clicked, ‘Oh, I can make money off of this.’”

About this unexpected design opportunity at eTc, Kevin said, “I could draw and I was a good listener. A lot of the work in design that I did starting out was Tacoma specific and I’m not from there. To create for someone else in streetwear, I learned how to execute and communicate ideas that weren’t originally mine.” It’s the second skill he identified himself possessing that makes all the difference. He’s not simply good at drawing but good at understanding the deeply personal stories of the people he works with and translating them into visuals that convey those stories in a concentrated form.

Kevin considers himself blessed to have been able to make a living over the past seven years by doing design, but recently it’s felt less and less like the passion he started out with. Kevin and his partner Jess have been running an all-purpose brand and design studio called Open Daily since 2018. “When there are projects that I need to do that pull me away from my creative soul, away from doing what satisfies me and fulfills me as a creative person — that’s when it starts to feel like a job,” he said, “Since the pandemic started, Jess and I have been doing Open Daily full-time, fully on client work. We haven’t been able to do internal projects like creating apparel and doing pop-ups, because we’ve been focused on generating income, and it’s been really draining for both of us. Jess and I realized that wasn’t what we wanted for Open Daily.”

Jess spoke up first, identifying that the last year of work felt off, and that gave Kevin the nudge he needed to make a definite change. “I reached out to Kacey to ask about the possibility [of working on Bricks & Wood full-time] and he said, ‘Yo, I’ve been waiting for this call.’ It was a Friday call and he said, ‘I’m ready whenever you are.’” Kevin started the next week. 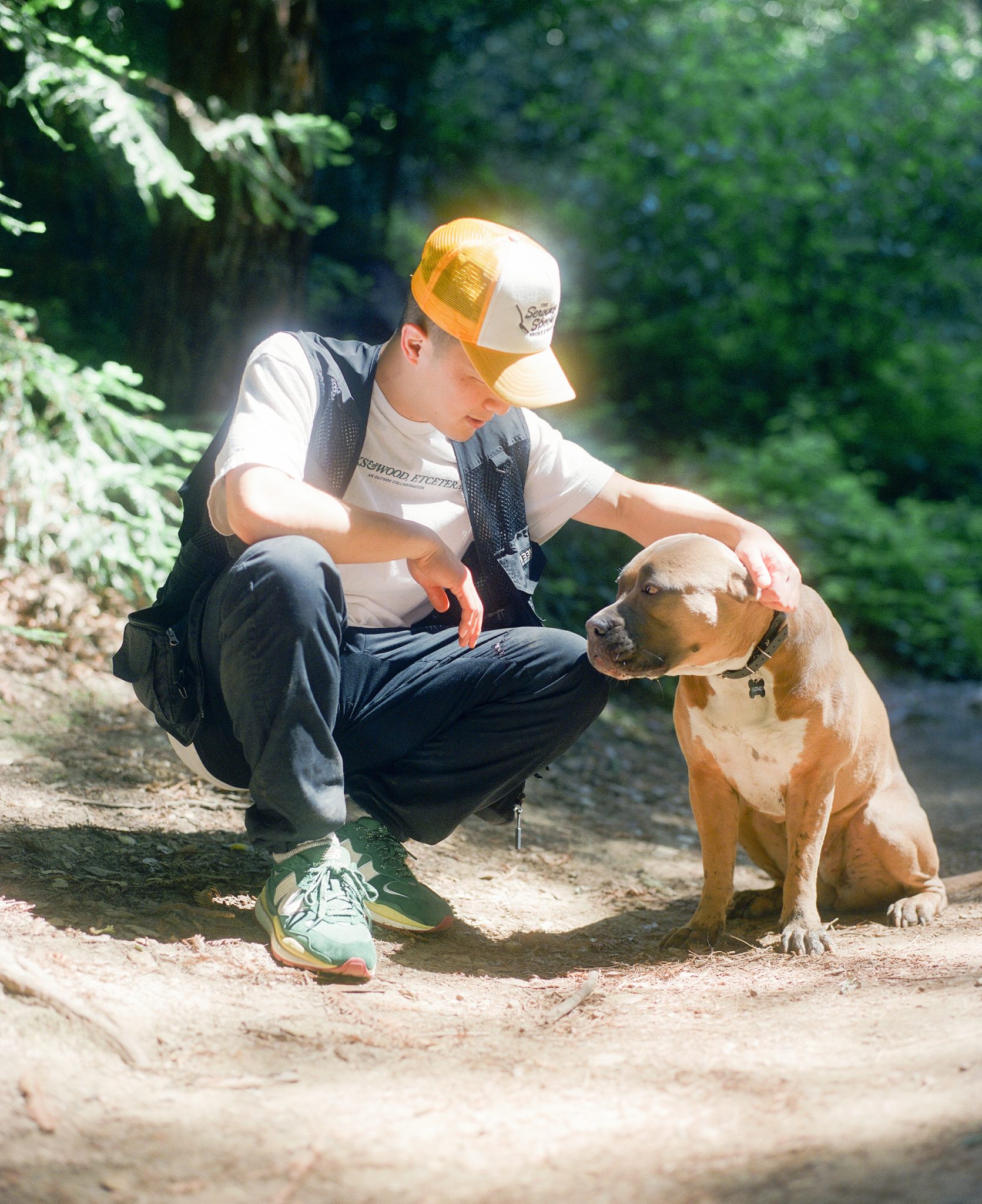 Kevin with his and Jess’ dog Chibi, a dog who loves food, hikes, and cuddles

“When there are projects that I need to do that pull me away from my creative soul, away from doing what satisfies me and fulfills me as a creative person — that’s when it starts to feel like a job.”

The design studio part of their live-work space in Oakland, California

A tidy workspace for a quiet mind

Life has come full circle. The day Kevin went in to interview at eTc Tacoma, Kacey was sitting at the front counter. They struck up a friendship and as Kacey grew Bricks & Wood, he’d contact Kevin to help with graphics and apparel designs. In 2018, Kacey went all in on Bricks & Wood, telling Kevin that he’d gathered enough momentum for it. Kevin’s commitment to the company comes from a penchant for small streetwear things that are heavily about community as well as his close personal relationship with Kacey. “I really respect what Kacey is doing. I see the power the brand has in terms of impacting his community,” he said, “As a friend and as a designer, I appreciate people who move with intention and that’s a big pro for me in working with him and the team cause I love them as people first.”

Understanding that friendship makes Kevin’s move to working on Bricks & Wood full-time a logical step to take; he finds the most creative fulfillment in working with good friends because he knows that there’s integrity and mutual respect in the process of what they’re creating. “That doesn’t feel like work at all, but we’re getting paid at the same time,” he said.

Items from the Bricks & Wood A Moment of Silence collection

Prior to the Bricks & Wood New Balance collaboration, the latest collection from the brand was A Moment of Silence, which was based on the concept of taking time for yourself to recharge, recuperate, and refine. The collection, which consists of items such as hoodies, caps, mugs, journals, candles, a Nalgene water bottle, and a blanket, is a perfect example of Kevin’s talent for listening leading to big things.

“Kacey and I were on FaceTime talking about work and life and we started talking about mental health and diving deeper into what a moment of silence meant to us. It turned into a whole collection during that call,” he said, “The products are meant as an expansion of my conversation with Kacey so more conversations can continue among others with themselves, with family, with friends, with anybody they meet.”

This gets to the heart of Bricks & Wood, which as Kevin puts neatly, doesn’t “make stuff just to make stuff.” There is no desire there to make something that doesn’t have a story behind it.

“We don’t make stuff just to make stuff. There’s an explanation or story or conversation behind the things we put out into the world.” 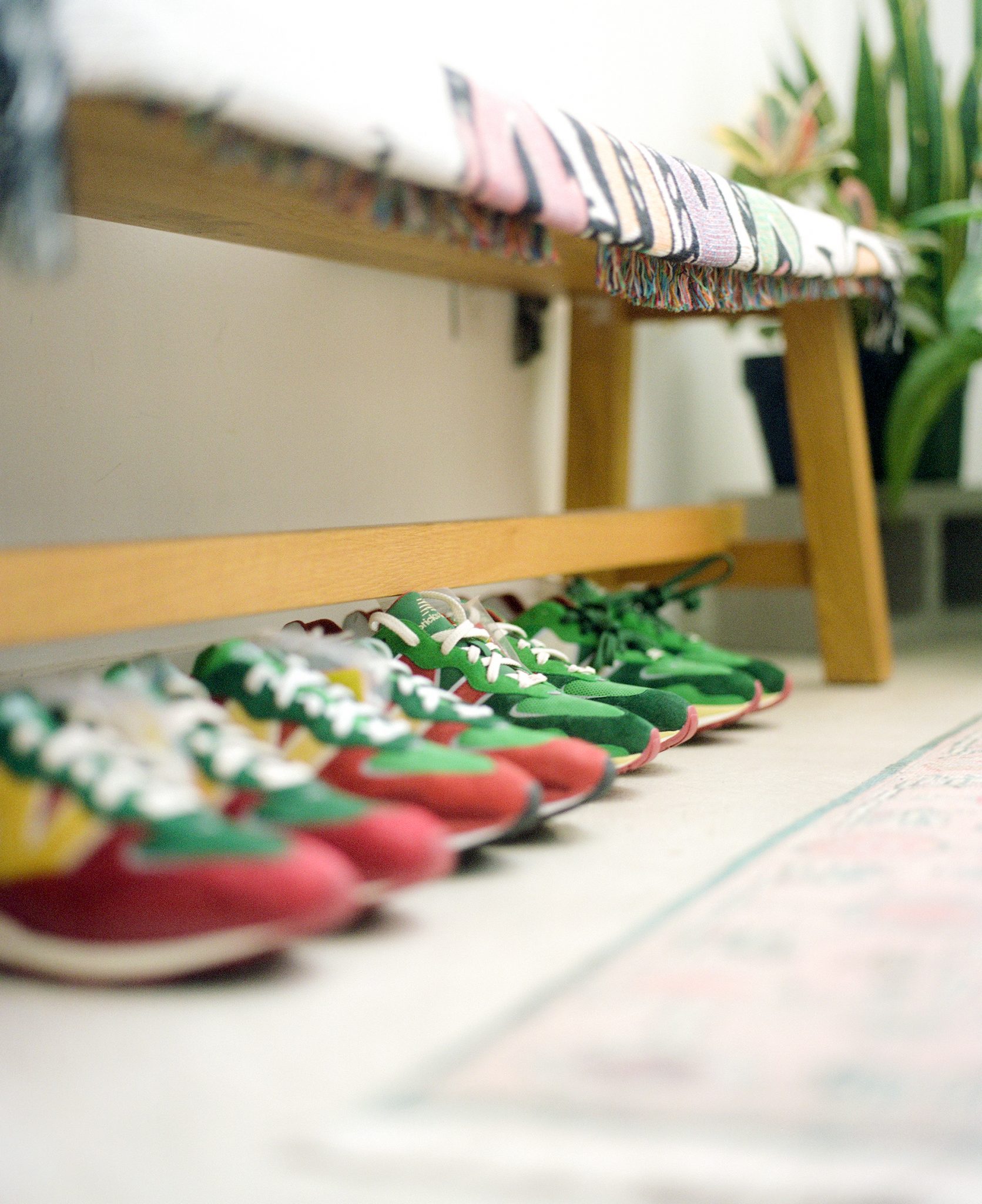 The Bricks & Wood New Balance shoe is the 57/40 model, an updated version of the iconic 574. Bricks & Wood is the first collaborator on the silhouette and were given license by the New Balance energy team (Kevin Trotman, Kristen Fougere, Nicole Underwood), led by Joe Grondin, Senior Manager of Global Collaborations and Energy, to go in whatever direction they wanted. With this opportunity, Kevin, Kacey, and the entire team were not just about to slap some colors together and call it a day.

Kacey wanted to pay homage to South Central and, specifically, to a significant landmark of his time growing up in the neighborhood: The Liquor Bank on Crenshaw & Stocker. Colors and textures for the shoe were pulled from the physical building, a patchwork red brick establishment with a green shingled roof and large old yellow signage. Working under COVID restrictions, the Bricks & Wood team designed digitally and went through a few rounds of physical samples over the course of three to four months at the end of 2020. After the shoe went into production, the team started to tackle designing everything else: the gallery pop-up, the marketing rollout, the photoshoots, the short film, the apparel collection, and the story to tie it all together. The Bricks & Wood New Balance shoe looks great and people are going to get fits off, but like everything they do, “it’s been about much more than the shoe.”

For Bricks & Wood, both working with a heritage footwear giant and having a billboard in South Central are a launchpad. “Everything’s aligned where we’re expanding what Bricks & Wood is and means to us through lifestyle collaborations that aren’t just about streetwear. It’s expanding through food to video games to sports to hiking to being active,” Kevin told me what to expect from the brand, “Of course, there will be more collections of products and building experiences around them, having face-to-face time as much as we can that uses these things we love as conversation starters.”

For Kevin personally, the meaning for him comes in helping execute a project at this scale and with a close friend, creating a moment that’s a big win for everyone he loves. “This is reaffirming that the hard work has been paying off, those sleepless nights, going against the grain and not being college-educated in any design field. It’s a testament to my dedication, to educating myself, going through career experiences that may not have made sense at the time. It’s reaffirming that those little steps have been leading to moments like these.” Soon, Kevin will be making the move to LA to work with the Bricks & Wood team in person and so that Open Daily can go back to creatively fulfilling in-house projects.

A momentum shift is coming for Kevin, Kacey, and the South Central company. With love, South Central is going from Bricks & Wood to the world.