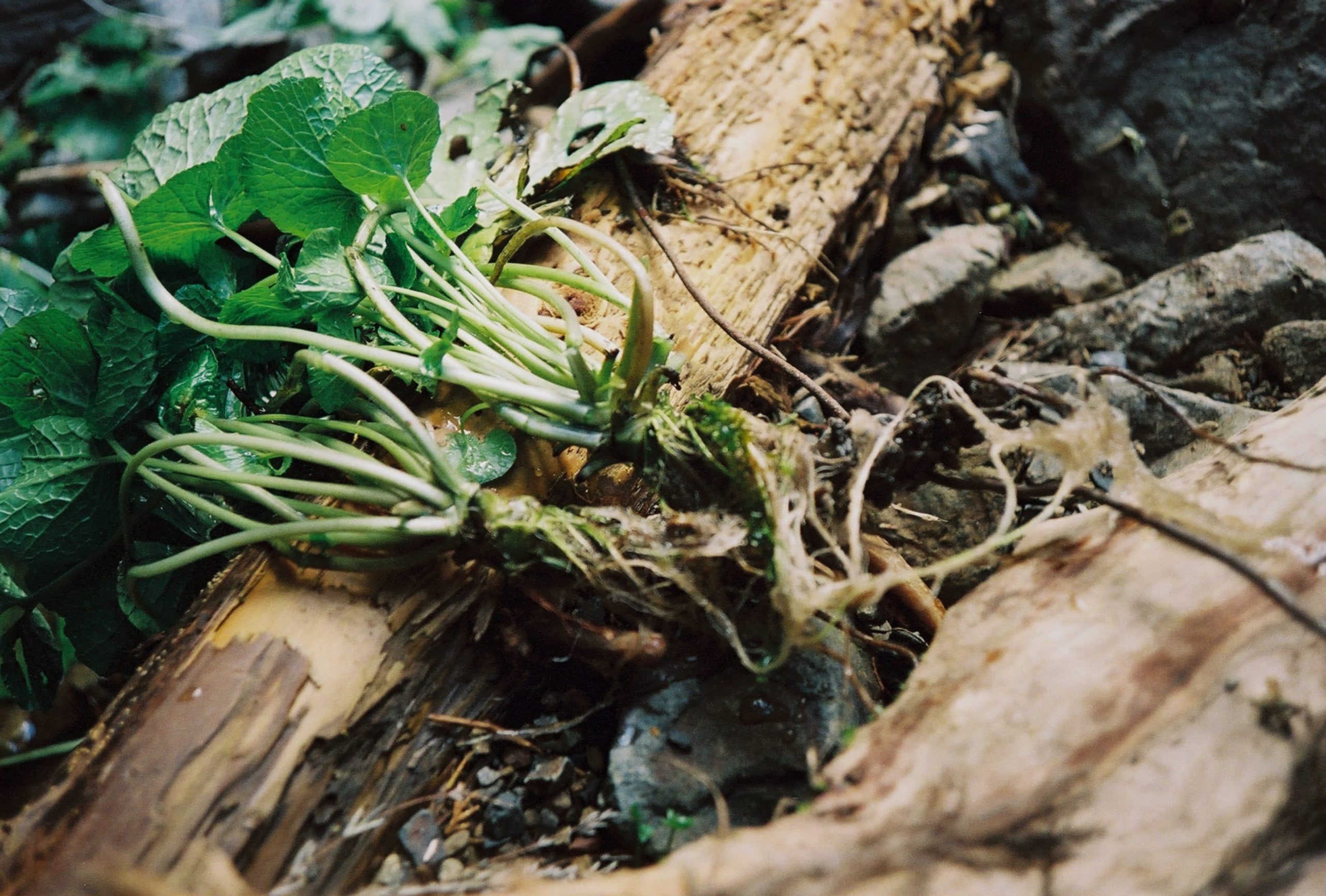 Wasabia Japonica — Saving a Forest with One Plan

Around 90 minutes outside of the Tokyo metropolis, deep within the mountains near Kawai, Okutama, nestles the wasabi plantations cared for by Mr. David Hulme. David, an Australian who now resides in Japan, is an avid mountaineer who discovered abandoned wasabi fields while hiking in the area. His curiosity led him to conduct further research into the culture of wasabi and he was eventually drawn increasingly to the allure of the local forest which was once home to a prominent Sugi (Japanese cedar) and Hinoki (Japanese cypress) timber industry. The timber industry intentionally introduced the non-native Sugi and Hinoki for their wood, but this was an ecological disaster as local species were decimated in making way for them.

Wasabi (Wasabia Japonica) is a plant in the same family as horseradish and mustard. Real wasabi grows naturally along freshwater streams in Japanese mountain valleys and are rarely grown outside of Japan. Notorious for needing very specific growing conditions—a constant stream of freshwater, little direct sunlight, cool air temperatures (8°C – 20°C) and high humidity in the summer—it’s not exaggerating to say that wasabi is a plant that needs pampering.

Wasabi takes close to two years for it to be fully grown. The slow growth and restrictive requirements for wasabi to flourish means that supply almost never satisfies commercial demand. In addition, a distribution system exists that keeps the consumer cost high and the producer return very low, with middlemen taking all the profit. From grower direct-to-consumer the price should be, for example, ¥500 for a 50 gram stem. But at special restaurants and high-end restaurants, wasabi stems could cost up to ¥1000 for a 50 gram stem.

Due to its prohibitive prices, what is typically encountered outside of Japan is a substitute mixture of mustard, horseradish, traces of powdered wasabi, and green food coloring—this combination is commonly referred to as seiyo wasabi (Western wasabi). The recipe means that consumption leads to that signature fiery feeling in the nose that is almost sinus-clearing. True wasabi is aromatic with a gentle heat and is widely believed to have anti-microbial and anti-inflammatory effects.

David now leads tours for those who are curious to learn about the cultivation and genuine experience of the prized plant. David hopes that through his wasabi growing efforts, he can bring awareness of the local area to help his true cause—repairing the forest and reversing the damage caused by the collapse of the timber industry which left the forest unkempt and sprawling with non-native species, such as the afore-mentioned Sugi and Hinoki, which contributed to an environmental and economic disaster.

David’s vision is to create a new, modern forestry industry based on naturally occurring timbers. In caring for his wasabi plantations and teaching anyone eager to learn about the well-known condiment, he encourages a deeper understanding of nature and Japanese culinary culture, plus, in the process of this—saving a forest.

The eco-diversity of the forests of Okutama is sharply imbalanced due to the prevalence of non-native species introduced specifically for their wood.

The forests of Okutama are home to oak, cherries, hazelnut, zelkova (keyaki) momi and many other species.

David once thought he would live out his days in Australia, but he now thinks Japan is his long-term home, since he developed deeper relationships with people in the local community. He is well known in the area as “David-san”. Here he hoists up netted fencing to prevent deer and wild animals from eating the wasabi leaves and exposing the stem. He is uncertain if the animals also feel the same sensation humans do when they eat the stem. During the guided tour he gave, his favorite thing to do was to toss away any moss-infected wasabi plants beyond his fence.

Fresh wasabi leaves can be eaten right away. The leaves give off the same stimulation as the stem but one that lasts for a fleeting moment.

The pace and flow of water is essential to the cultivation of wasabi. This constant stream of mineral water that flows from the mountains of Okutama is the reason why wasabi grown here is said to be better than wasabi grown in Nagano, for example, where a bigger wasabi industry exists.

The kazusa is a tool used to loosen up soil (and gravel) underneath riverbed stones.

The wasabi plant is washed using the same spring water it was grown in. After trimming the stem, the wasabi is ready to be consumed.

A sharkskin Oroshigane grater is used to grate the stem. Once the paste is prepared, it gradually loses its flavor if left uncovered, one possible reason as to why wasabi is placed in between the fish and rice in sushi. 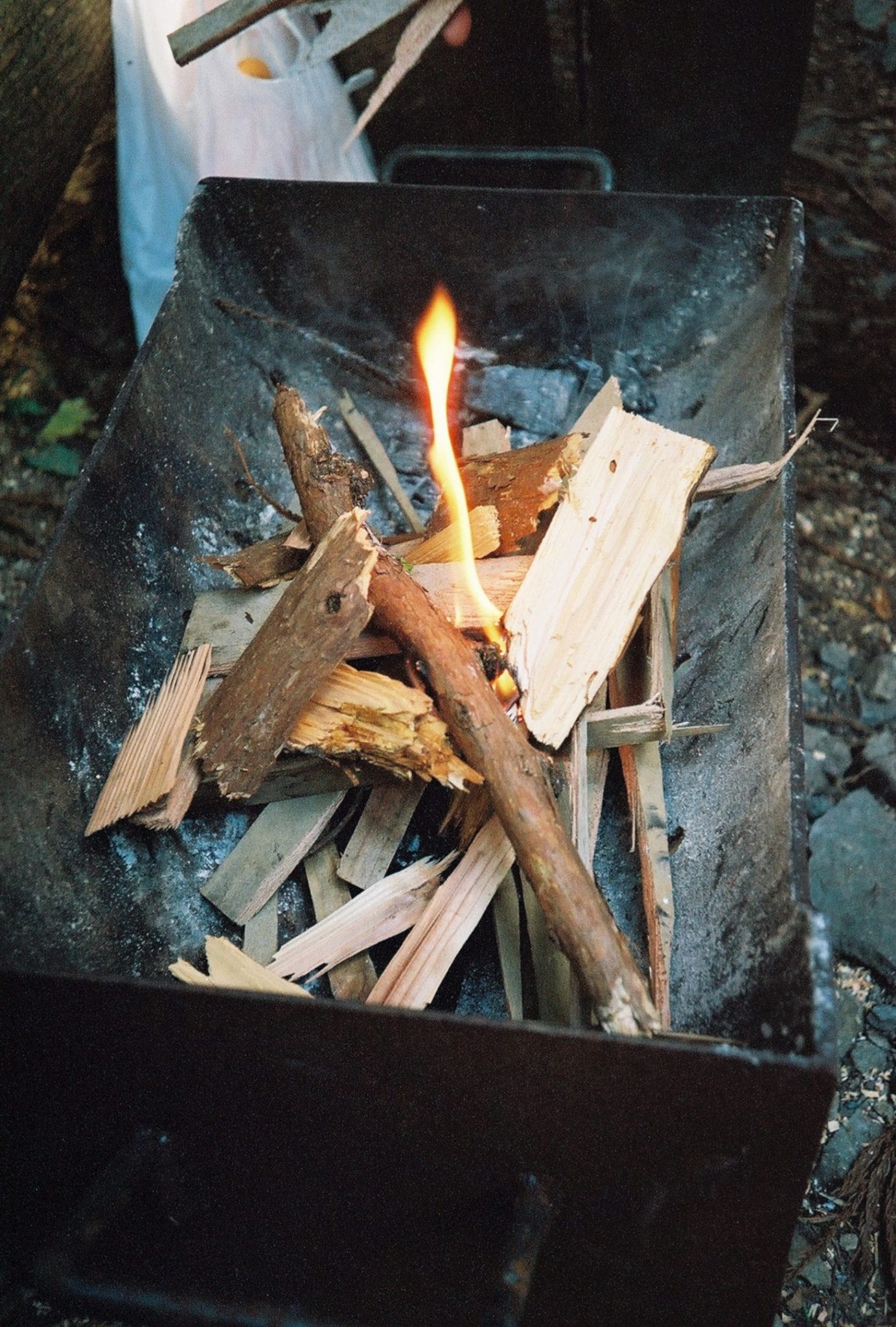 With the sun setting, a fire was lit for warmth. The smoke was the only sign of human activity in the sleepy forest.

More information about David’s wasabi tours can be found here.