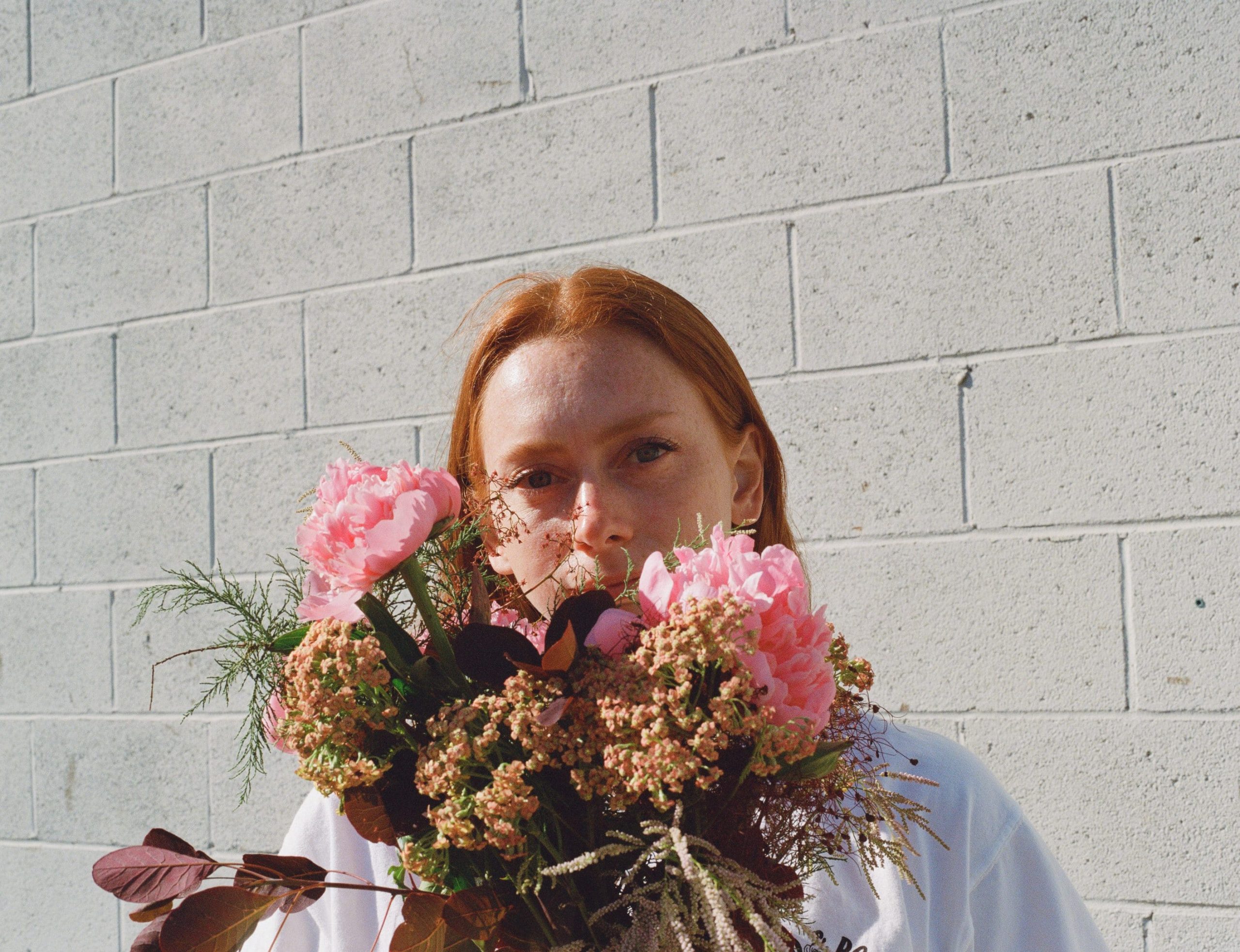 Hand & Rose is a vintage, yellow truck carrying fresh flowers for purchase. The left side is adorned with a woman’s hand with blue nails, gently holding a red rose. It’s quite reminiscent of old nail salon signage with a 2018 update. Behind the wheel is Sarah Lineberger, co-founder of Hand & Rose and floral designer, who has long red hair that blows in the wind as she drives and a warm, welcoming smile that reveals strong white teeth.

Sarah is, in a word, dreamy. The photos of her online are all connected to the pieces optimized for views that most other media outlets ran, highlighting the floral trellis she created for Beyoncé’s second pregnancy announcement. When we met, she had just returned from New York where she finished covering the front of the Lower Manhattan Squarespace office with 4,000 flowers in a rainbow assortment to celebrate Pride Month. She invited me to visit the raw Downtown LA space that she shares with her partner Awol Erizku, a visual artist and the other half of Hand & Rose. After speaking with her, I quickly realized that even with these two massive projects under her belt, there’s something very different about her and what you might assume an LA florist would be like. My naive assumption half expected her to be quiet and introverted, wearing some flowy dress, situated in a perfectly clean, curated, millennial pink space. I should know better, but the other florists I follow on Instagram seem to fit those descriptors, using their social platform as their voice and the flowers they arrange as something they hide behind. Even as a woman, you realize your own shameful misogyny and stereotyping go to work.

I was happily (and embarrassingly) proved so wrong. Sarah’s stories are confident and her tone is to-the-point. She is no waif and in a world of well-curated feeds (@handandrose being one of them), she is unafraid to talk about “failures” openly and acknowledge that she’s still learning. However, when you consider that Sarah started in the floral industry as a teenager, you think about how even more confident she has every right to be: she has spent fifteen years seasoning her craft and has solid experiences to back her up.

Sarah Lineberger wears a tee designed in collaboration with Chinatown Market and MISSBISH.

Born and raised in Tustin, a suburb of Orange County, 45 minutes south of LA, Sarah kicked off what would become her career when she took on a part-time job at a floral shop at the age of 15. After graduating high school, Sarah realized she had an affinity for flowers, when she stopped going to her interior design classes and picked up more hours at work because people were really enthusiastic and into the work she was doing. “It was a gradual thing, especially with freelance, you have to learn how to manipulate many different styles there’s a lot of different designers, a lot of different companies that focus on a certain aesthetic, and I’m still learning.” Assisting a designer who didn’t like her very much (which she endearingly laughs about), she says she knew this was her calling “about a year and a half in, I wanted to learn more and more.”

She continued to ingest information by working at the LA Market to then working with flower wholesalers, assisting other designers, leading as head designer, before she finally decided to leave California for New York. She breezes through her years of experience quickly and admits she’s even considered getting out of the industry, “I’ve tried to get away, but it just drags me back.”

In 2012, she opened up her own shop in Brooklyn with the name Chrysanthemum. Owning her own brick and mortar brought the stress of balancing soliciting new customers and doing deliveries with needing to be present on the shop floor for regular maintenance. When she eventually broke ties with her partner, she moved back to LA. (She passed the shop while she was in New York working on the Squarespace project and, during our interview, reflected on how different her current stage of life is now.)

What stayed with her when she came back west was the example of fantastic wholesalers in New York that were only accessible via truck. Skipping markets altogether, she exclusively relied on these wholesalers because they punctually came to her multiple days a week, had consistently fresh flowers, and made it easy for her to hop out of her store, get on the truck, and shop.

Keeping in mind that better buying experience, Sarah hoped to reinterpret the concept and go directly to stores, restaurants and other potential customers instead of asking people to come to her. She would no longer have to worry about the loan that she didn’t get for a brick and mortar store that she had first considered. Instead she would get to “be everywhere at once. Turn the truck into a studio, handle deliveries in the same truck, open up shop, with a pop up ability and be present.”

“Be everywhere at once. Turn the truck into a studio, handle deliveries in the same truck, open up shop with a pop up ability, and be present.”

— Sarah Lineberger speaking on her decision to run with the flower truck concept.

The journey of finding and acquiring the Hand & Rose truck was as arduous and winding as Sarah’s path to becoming her own boss. It started with a search for an old FedEx truck since that’s the accessible and affordable option, but with California diesel regulations past a certain year, (as of 2020 no engine older than 2010 is allowed on the road), the only possibilities left were to go with a brand new $60,000 Mercedes sprinter—or find something more alternative.

The decision was easy: “Fuck the sprinter, we’re going the nostalgia route,” is how Sarah puts it.

Sarah has an abiding love for classic cars, having grown up with a father who was always working on them. It took Sarah and her father several months to find an old Chevy P10 step van. Once they found it, it came sans engine and in need of a full interior rebuild, but it was worth the work and the wait: the truck came with an extremely rare extended roof, perfect for standing up straight within the van and arranging flowers as they are ordered, specifically for each customer, rather than making premade bouquets in her studio and selling them as she goes out. The bodywork was finished in Arizona and she took on the mechanical work when it arrived.

The next thing to fall into place was the branding. Sarah tells the story that started in 2016, “Awol and I, we were working on a logo together to start our own business and he designed the logo himself, kind of a reinterpretation of an iconic hand holding a rose; he did tweak it and make it his own. After spending some time apart, Awol used the imagery at the end of that year in many paintings he did with Nina Johnson Gallery in Miami.” He was going to name the show “Sarah Lineberger” but when Sarah asked him to please not name it that, he instead appropriately named it “I Was Going to Call It Your Name, but You Didn’t Let Me”. Having the logo locked in, their next conversation was, “let’s get our shit together, be adults, and let’s get this thing going.” For the name they were inspired by “Nefertiti Flower” and the inspiration the Egyptian queen brings (which is why the color of her skin is a richer, darker shade), but then steered away from that to a more literal take on the logo, “Hand Holding A Rose,” which was too long so they landed on Hand & Rose.

Then came the yellow pantone, “We didn’t want it to look like a school bus, but we didn’t want to do red, didn’t want to do blue, we were thinking about pink, and then I didn’t want to be pink. Yellow just seemed like it worked.” And it went with everything they were already photographing and creating that would live in and out of the truck, in addition to the flowers. It seems like when something is right, it doesn’t need much explaining: like the logo, it was a gut feeling and simple fit, much like the name. 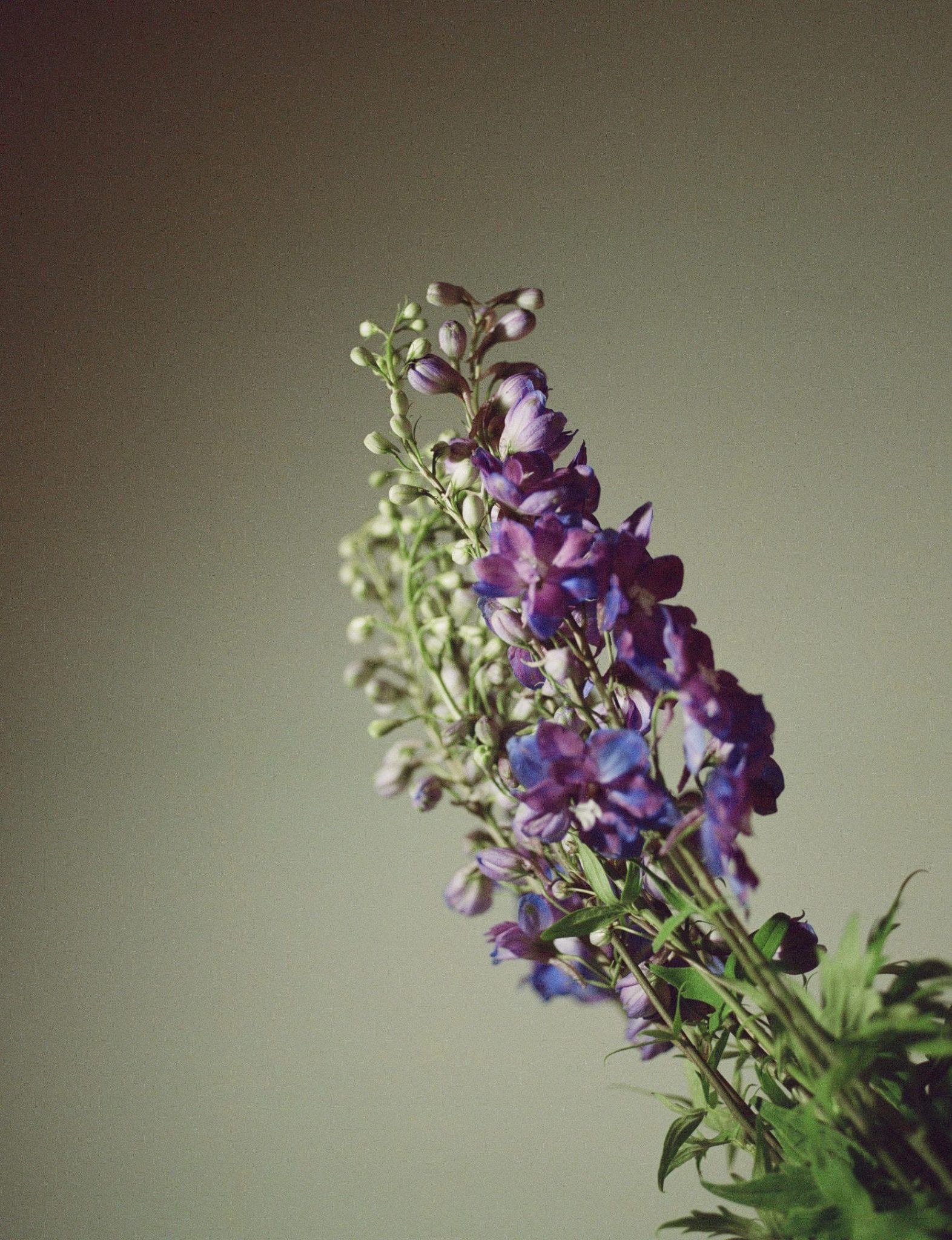 “I’ve always said to myself, ‘there’s nothing new under the sun.’ I’ll continue to evolve my aesthetic but in terms of the DNA of the brand: we want to work with local artists as well, local ceramists, local zine makers, really just want to try and keep it local..”

The floral style for Hand & Rose is monochromatic, single groupings, and simple ingredients. Her approach prioritizes local, supporting California farms and families she’s known for years. She does this with with the hope of helping boost her surrounding community and economy, knowing that imports create garbage and waste with hidden costs that people don’t often realize. “I’ve always said to myself, ‘there’s nothing new under the sun.’ I’ll continue to evolve my aesthetic but in terms of the DNA of the brand: we want to work with local artists as well, local ceramists, local zine makers, really just want to try and keep it local.” All the while, Sarah is always open to learning, seeing what works and what doesn’t. “Quality speaks in volumes and knowing your shit, going into it saying ‘I can’t do this, but I know how to do this.’ And not being afraid to say no. I’ve said no quite a bit this year already just ’cause I know that it [projects or decisions] doesn’t match the quality that I’m putting out. And that goes with any industry: hair, make-up, restaurant, catering. You’re going to learn your lesson quickly through mistakes.”

“It’s about giving people a good experience regardless of whether they buy flowers or a non perishable good like a magazine, or just a smile.”

Now, Sarah can deliver all of these things from her yellow truck, cruising the streets of LA seeking out friends, customers, and opportunities. She’s free to go where she wants, when she wants, with customers and retailers who are thankful to have the truck there. The truck is a bonus to anywhere it’s parked, unlike the store, which could be better described as a ball and chain. The day we spoke, she was just about to take the truck out for the official kick-off of Hand & Rose. Since then, Sarah and Awol have spoken at NeueHouse in Hollywood, popped up at Smorgasburg in Downtown and Platform in Culver City.

Once you see the Hand & Rose truck, you’ll know it. And when you approach Sarah, you see more than just beautiful flowers by a beautiful florist, “It’s about giving people a good experience regardless of whether they buy flowers or a non-perishable good like a magazine or just a smile.” As it rides towards you against an LA city backdrop, you’ll see it first, smell it second. The aroma hits you in the face before you are greeted with warm eyes and years of experience. As she goes from neighborhood to store to restaurant to museum in the City of Angels, look out for the fire red hair that belongs to Sarah Lineberger in the small truck that is always on the move to deliver beauty that fits in your hand.