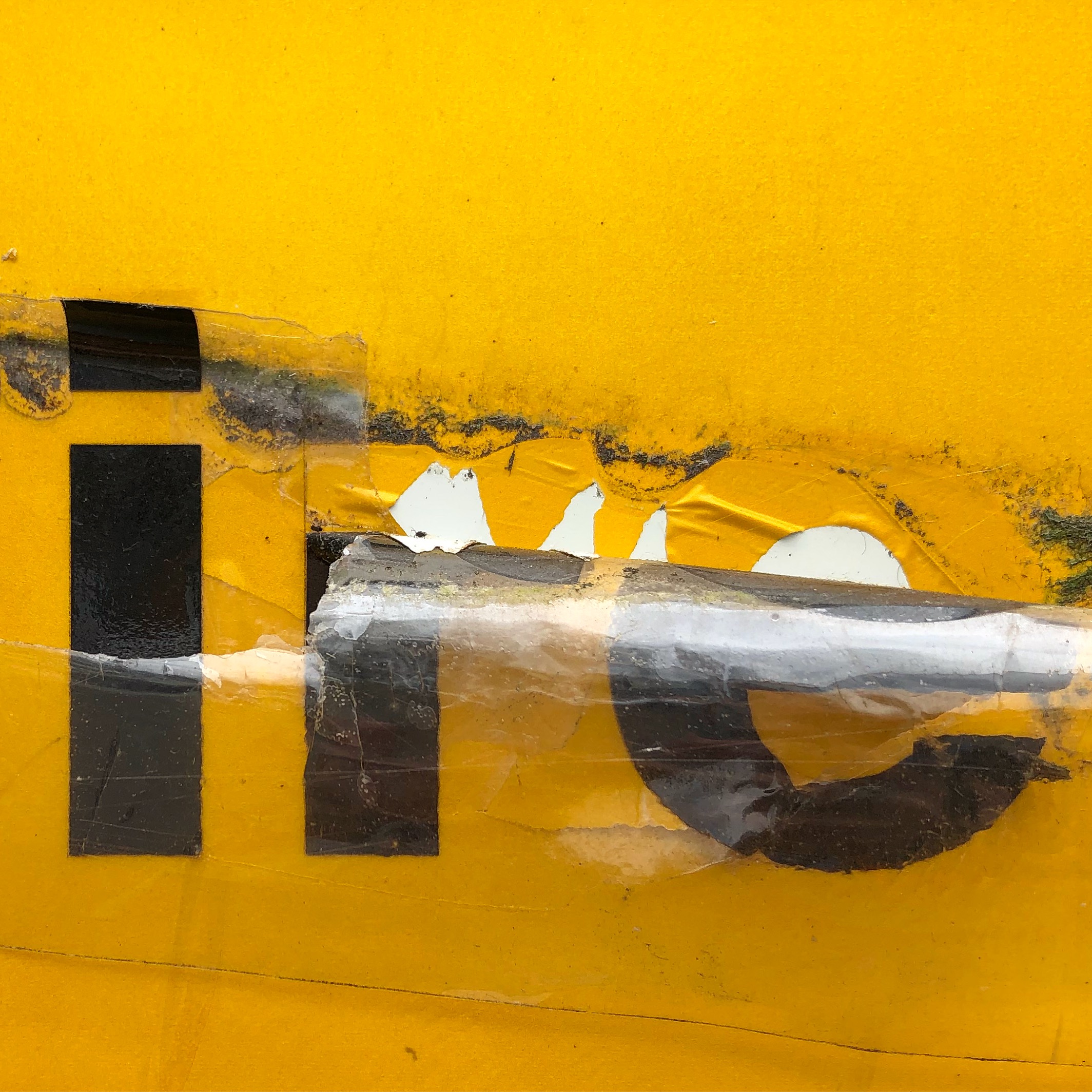 If you’ve ever seen a copy of Ray Gun, the experimental rock-and-roll magazine that ran from 1992-2000, you might recognize the raw grungy aesthetic uniting many of its covers. Chris Ashworth is the British designer and typographer who worked on 15 issues of the publication and in the process, would come to arrive a style appropriately called “Swiss Grit.”

A devout adherent to the analog process, his hands-on directness that creates hugely flawed and beautifully imperfect typographic works stands out in an age that emphasizes the cleanliness, control, reversibility, and standardization of digital workflows.

Over three decades, he’s continued to work with paper, ink, tons of tape, and Letraset dry-transfer lettering sheets, among many other physical materials. After that, he often submits his creations to time, the elements, and any other physical forces that will weather and distress them into their final form.

We recently spoke with Chris via email and learned about the origins of his trademark Swiss Grit style, his approach to analog design, and how he’s been revisiting his personal work after an extended hiatus.

Could you describe what you do currently?

I am a Creative Director at Microsoft working on the Surface, Windows, Microsoft 365 and Edge products. I run an in-house Creative Studio with a team of 20 people.

You’ve previously worked as a Creative Director at Getty Images, Nokia and now Microsoft. Could you talk a bit about the divide between your experimental style and the type of work you do for large companies?

When I left college in 1990, I was lucky enough to be able to do experimental work that paid the bills (just about). Then after Ray Gun ended in late ”98, I had done what I dreamt of doing from a career standpoint and I was at a crossroads.

I chose to stop working by myself. or with one other person and started running a creative team — first at Getty Images — which was something totally alien and new, which I felt was like starting over and super exciting. From that point in 1999, until around 2018 I didn’t really do any personal design work outside of my day job. I lost the itch.

Then I started taking photos. Not out of any deliberate decision, but it started as a way to capture my interest and excitement for type again. Then I got a drafting table and started tinkering. I also started sharing some of my personal work again via Instagram. And from there I’ve done a bunch of work in my spare time for Monster Children Magazine, Marvin Jarrett, and several small contributions to projects for Malcolm Garrett.

I find it very therapeutic. In terms of my personal versus professional work — it’s an odd thing that I’ve always thought about…I guess I’ve arrived at a place where I believe the thought process and the way that I approach ideas and problem-solving is the same in both my professional and personal work.

I guess I've arrived at a place where I believe the thought process and the way that I approach ideas and problem solving is the same in both my professional and personal work, but the way I express those thoughts and ideas are vastly different in terms of visual expression.

Ray Gun was famous for its radical approach to typography, with some of its designs (like the interview done completely in Zapf Dingbats) not even being readable. Do you see characters and words as assets to achieving a greater aesthetic whole or are the interpretable meanings from the words important considerations too?

The latter. I see type as a communication vehicle — both in what words can literally ‘mean’ and also how they can be used to form ‘other meanings.’

Could you describe Swiss Grit? How does it retain, differ from or expand on your influences from Swiss design?

I was taught by a Swiss designer between ’88-90 at York College, so I was well versed in the rigors and principles of Swiss typography and design. Then in the early ’90s, I was exposed to Weingart, Carson, VanderLans and Why Not Associates, amongst others, whose work moved me in the same way the Swiss masters did.

I guess from that point, I unconsciously started expressing a blend of all of those approaches which ultimately came to fruition in the Ray Gun work — there, you see a lot of negative space, gridded compositions, sans type etc., but it has an organic, handmade touch to it — the grit part.

So the term sums up the blend of the two approaches — for me, Swiss typography and design is the bedrock of all great graphic design, but it is soulless. I’ve tried to bring some soul to it.

For me, Swiss typography and design is the bedrock of all great graphic design, but it is soulless. I've tried to bring some soul to it.

Ruler, pencil, paper, scalpel, Tippex, tape, tape, tape, Letraset, glue. In terms of process, I start with a pencil sketch, super crude stuff, but it usually gives me a sense of where I should go. Then I simply start pulling from what’s around me – I keep a lot of materials close at hand.

Could you talk a bit about your experience with revisiting your personal experimental style? Has it been challenging to balance time for personal work?

Now that my twins are nearly eight, I’ve been able to find the time over the last 2-3 years to slowly get back into my personal stuff. This is usually between 8 and 10 pm during the week, and maybe a couple of hours here and there at the weekend. It started with small ‘type sketches’ that I post on Instagram and then I guess I’ve just developed from there — I recently started a new series of work using an old typewriter which I’m enjoying a lot — the work is a little in the concrete poetry realm.

Among all the lengths you’ve gone to weather and distress your prints (such as driving over them and secretly sticking them to the soles of your kids’ shoes), which was the one you enjoyed the most?

Yeh, I’ve had a lot of fun with that. Nothing quite beats ‘watching paint dry’ or Tippex when you’ve thrown it over some type and you’re watching some parts disappear and some reappear.

Are there aspects of digital design that you find advantageous or even enjoy?

It’s a production tool for me. Nothing more. I reluctantly use it.

As your work shows, a lot of character comes from things that are allowed to age and deteriorate and be dissonant and imperfect. Have you implemented this principle in the contexts/teams you work with?

I haven’t really ever brought my personal aesthetic into my corporate work. There’s only a handful of people in my corporate job that know I do personal work and have a history of experimental work.

Do you have advice for people who are trying to get back to a more hands-on approach to doing creative work but feel pressured to stick to digital workflows for the sake of “productivity?”

Do whatever you feel fits the brief. Both have their merits. As long as you have a good reason for it, then stick to it.

It's a production tool to me. Nothing more. I reluctantly use it.

Are there other artistic fields/areas other than type you’ve explored?

No! My obsession for type burns deep. I remember going around Europe with my best mate in 1987, and when we returned home after a month he told me that he needed a break from me because “he was sick of hearing about type” — apparently I’d commented on all the signage and magazines I’d encountered!

What are you listening to, watching or reading these days?

Depeche Mode, New Order, Radiohead, LCD Soundsystem, NIN in that order. I don’t read. Watching… going back to the movies I grew up on… the last one I saw was ‘Wanted Dead Or Alive‘ — the Rutger Hauer movie.

How has the current situation affected your work?

My Letraset supply is being hit extra hard.

Do you have any upcoming bodies of work or publications you’d like to mention?

Please follow my obsession on Instagram @ashworthchris, and I’m working on a book of my work, 30 years of Swiss Grit.

Thanks once again to Mike Guss for putting us in touch. To read his story, check out our previous Type-of-Graphic on his Typeloop app. For the story that started this series, check out Synoptic Office’s Ming Romantic.