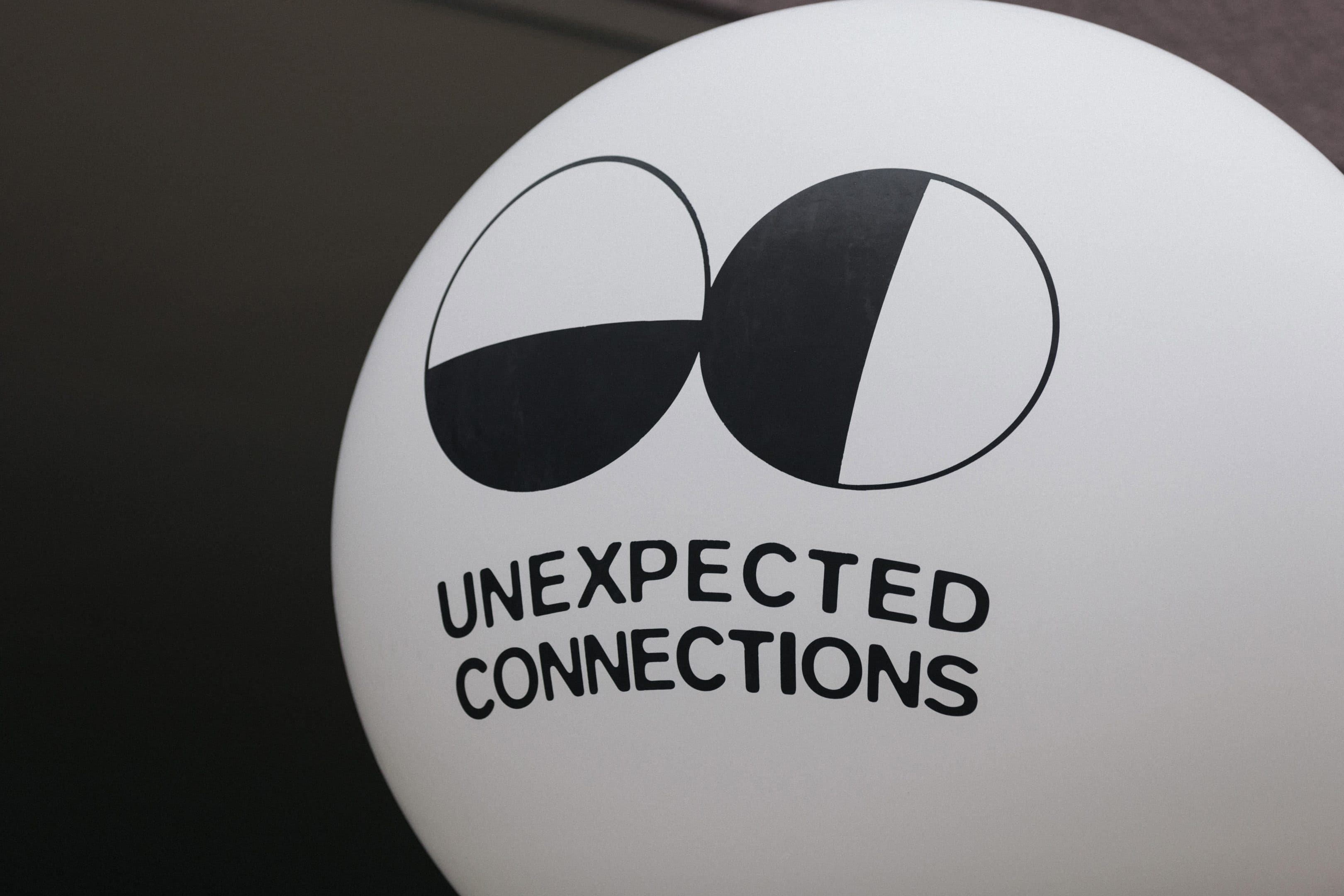 Celebrating and Evaluating — A Recap of Unexpected Connections

On Wednesday, November 7th, MAEKAN and Imprint hosted the Unexpected Connections Conference. Throughout the day, speakers from all sides of creative culture explored the ways in which their everyday life intersects with their professions.

Here’s a recap of the event and our insights into what went down. To find out more information about Unexpected Connectons, head over to http://ucc.maekan.com.

I have a trick for when I meet new people in order to get more quickly into a substantiative conversation. I resist, for the entire meeting if possible, asking the person that I’ve just met what they do for a living. I’m not always able to swerve clear of what’s considered small talk—I still tend to talk about the weather more than is advisable—but I try to be honest and ask open questions that leave room for the conversation to develop in many possible ways. The artist David Choe, in his 45-minute session on stage at the Unexpected Connections conference, said that he would begin by telling the 450 people in the audience the thing he least wanted to share. Think what our interactions with each other would look like if we adopted that practice in our daily lives. That’s what happened, in a scaled-back way, throughout the day in Long Beach during the conference hosted by Imprint and ourselves in early November. People in attendance were open with each other immediately, in the kind of way that typically takes being on a third date or having had a second pint. Conversations started where you’d typically get to 30 minutes in rather than at square one.

Long Beach wound up being important as a location, more so than just being the neighborhood Imprint and InterTrend are located in (InterTrend and Imprint Venture Lab are both managed by Julia Huang, the mastermind behind the conference) though it was important to us that we show support for local culture. What wound up making Long Beach appropriate was its removal from downtown LA—the people present really thought about being there and made a commitment to stay at the conference for an extended period of time. Rather than people floating in for the specific talk they were interested in and then coasting out again, there was a dedicated group of people prepared for deep engagement. People would recognize each other and conversations that were started in the morning continued on to the afternoon and then flowed into drinks at the Long Beach Museum of Art. Speakers being present for more than just their appointed slot of time also demonstrated commitment to availability and the sharing of knowledge.

What happened on stage wasn’t the highlight of Unexpected Connections. Everyone in attendance might have their favorite talk, speaker, or quote from the program, but the genuine highlight worth celebrating and what I think really sets this conference apart is what happened off stage. The program featured John Maeda, John C Jay, Jason Mayden, Jun Cha, Jennifer Ferro, Lindsay Jang, David Choe, James Bailey, Jeff Staple, Karen Okonkwo, Madeleine Brand, Helen Zia, and Kenya Hara. That’s an all-star lineup. John C Jay advocated for unlearning and relearning; Jun Cha and Jason Mayden wound up contemplating mortality; Karen Okonkwo and jeffstaple discussed their personal why’s; Helen Zia and Madeleine Brand emphasized exerting as much pressure possible on the arc of history so that it will bend towards justice. We have heard from people in attendance that the things said by various speakers encouraged them, affirmed their life decisions, and compelled them to action. Still, all this was more purposeful than being inspirational words or honest, emotional stories told by charismatic figures—the programming was the structure for equally profound conversations happening off stage in private. It’s those conversations that took place and are ongoing that make Unexpected Connections a success.

I take heart in seeing real physical proof that my anxieties about culture are unfounded. My worst fears about culture are that it’s becoming a joke, reduced to superficial gestures, removed of nourishment, and posturing for commercial means. “Let’s build fam” is tired industry lingo that has eroded the meaning of the word “build” when we speak of “building community” and “building connections.” I’m going to use the word here because the concept of building is important. We didn’t set out to make something new that didn’t previously exist—we wanted to build on what’s there, and we nurtured what’s already natural in people. We built the structure of a conference so that more productive building could be done by attendees. People were unusually ready to extend a handshake and an introduction to strangers.

We called this conference Unexpected Connections as a way to describe creativity and the conversations that happen when you bring together people from different walks of life. I also personally interpreted this name as my hope for what might occur in people’s minds. On top of those things, what I didn’t predict seeing was the creation of an environment where attendees had elevated expectations of each other for being present and making human connections. There was a joke made by an attendee on social media about the name of the conference being appropriate for a singles mixer. I embrace that observation, not because people should go to the next event we throw in the hopes of meeting their soulmate, but because seeing strangers connect in vulnerable, serious ways was a remarkable outcome.

It’s exciting to look forward into the future when considering that the successes we’ve observed are not necessarily tied to a specific structure, logistics, or organizational items. There is flexibility in format and areas for growth when it comes to planning and production. We maintain focus on building culture through true human connections, but embrace the knowledge that what can be done to make that happen takes different shapes.

For Eugene and Charis’ immediate responses to the Unexpected Connections conference, listen to the special episode of our weekly culture news podcast MAEKAN It Up (above and below) recorded 12 hours after the conference wrapped. While you’re here, if you haven’t heard of MAEKAN It Up, scroll through the archive available on iTunes or wherever you listen to podcasts. Each episode provides analysis of current events in creative culture chosen from our twice a week MAEKAN Briefing and attempts to reach some kind of conclusion on the state of culture, media, tech, food, whatever it may be, in our modern times.

Still, all this was more purposeful than being inspirational words or honest, emotional stories told by charismatic figures—the programming was the structure for equally profound conversations happening off stage in private.

We didn’t set out to make something new that didn’t previously exist—we wanted to build on what’s there, and we nurtured what’s already natural in people. We built the structure of a conference so that more productive building could be done by attendees.