Audio by Elphick Wo
Photos by Alex Maeland

Masaya Kuroki’s story is much like many others, moving from the East to the West, Kuroki was faced with many cultural barriers that he was able to overcome through his love of art, music, and fashion. With the help of friend and business partner Gildas Loaec, Kuroki has continued on an almost illogical path that focuses on physical retail experiences in our increasingly dominant digital era. Masaya touches on his personal goals for Kitsune as well as the hardships and hurdles he had to push through in order to see his brick and mortar brand through success.

When it comes to dichotomies, from the classic ‘old meets new’ to the cliché “East Meets West,” rarely does the interaction give way to any sort of nuanced final product that balances the two original sources and adds fresh perspective. For brands that base their identity off these clearly half-and-half interactions, without the right soul-searching, the final image can come off as contrived. It can appear as a desperate attempt to mash two influences together and make the next big thing.

Not for Masaya Kuroki, however, Co-Founder of record label and clothing brand Maison Kitsuné. The unique Franco-Japanese sensibility that underlined his brand wasn’t simply found by experimentation. It was lived.

Born in 1975, Masaya moved to Paris when he was 12. From there, he would gradually become familiar with Paris’ role as one of the world’s major centers for fashion and style, but it would be quite a few more years until the blend of his original and new-found cultural roots would coalesce into the [pioneering brand] it’s known as today.

We recently met with him at his new Maison Kitsuné flagship store in Daikanyama, Tokyo to gain some more insight on reconciling two different cultural influences and maintaining a strong brick and mortar retail model in an ecommerce-driven market. Unlike many, Masaya chose to stray from the path he was originally trained for early on to pursue a passion revealed by a chance meeting, thus building his own creative philosophy and speaking it through his work.

“Every day, we get reminded about where we started – the fashion and music industry 15 years ago was changing and we felt that it would collapse… Doing clothes, music, it’s awesome to see where it’s taken us.”

The iconic Kitsuné fox lives on the front window of the shop.
Maison Kitsuné’s custom hangers.

Following his graduation and with an architectural degree in hand, Masaya left university and then went on to work for one of France’s leading architects, Jean Nouvel; a phase that would nurture his curiosity for design, form and function. It was the natural bridge between these fields that would guide his first forays into the fashion world.

Faced with financial difficulties, Masaya found work on the weekends helping to run a vintage store, offering him both a source of well-needed income and fascination thanks to the unique styles and designs stocked there.

It was also by working there that he quickly befriended Gildas Loaec, who incidentally worked in the neighboring record store, and was also part of the team working on Daft Punk’s Interstella 5555 at the time. At Gilda’s invitation, Kuroki accompanied him as his interpreter to Japan, where the future partners would see clothing and music sold together as part of one synergistic experience. This cross-media fusion would go on to become the distinguishing catalyst for their brand, Maison Kitsuné.

While Masaya’s formative years were primarily steeped in French influences, regular opportunities to return to Japan, such as with Daft Punk, and his subsequent move to Tokyo would reacquaint him with his native culture as well. Where some experiences would reinforce his French social upbringing, others would draw him closer to his Japanese heritage.

Starting as a concept label in 2002, Kitsuné (meaning ‘fox’ in Japanese), gave equal attention to both its music and clothing lines. It also showcased a diverse range of both Japanese and French influences. Through the years that followed, the duo was able to grow Kitsuné into a global brand due in no small part to Masaya’s innovative ways to channel the brand’s founding influences, which included building both successful apparel and record labels.

After moving back to Japan, Masaya soon realized that he was pulling more and more characteristics from both his French and Japanese backgrounds even more.

“It feels good, no confrontation. You know, Asian culture is still new to me. For example, when I start to negotiate in meetings, I feel like I’m from Paris. But when I’m eating sushi or Japanese food, I feel more Japanese. I guess it’s because I can appreciate it from deep down – when I’m in a negotiation, it’s about putting your mask on. You know, because it’s work.”

Traditionally speaking, bluntness often finds itself at odds with Japanese culture, but with the Parisian influence in him remaining both a permanent and valuable asset, Masaya had quickly realized that there was a distinct advantage to coming back to a place so familiar and yet so different.

“When I negotiate, I’m in my work zone. So in those situations, I do feel like I’m from Paris because I grew around so much evolving cultures.” Oddly enough, Masaya’s cultural differences were not a problem once returning back to Japan.

Instead, Masaya constantly found himself separated not by cultural or language barriers, but generational ones that exposed him to mindsets vastly different from his.

“After the Second World War and all that shit, the old timers, built Japan to be the safest country out there. So through that, I was reminded once again that culturally, society was constantly telling you not to express too much of yourself. So it’s less about having individual expression or standing up for the things that people believe in. But if someone does end up making a stand, people will follow. But finding that person can be pretty rare here in Japan.”

“You know, me and my partner Gildas, were both very passionate about music, so DJing was a great excuse to travel around the world. It was the best of both worlds, not only did we get paid but our expenses were paid for also. It was never a secret that fashion was something that the two of us wanted to pursue, so being able to travel, meet people, buyers and visit stores around the world, really helped us make that jump. It was great, because you know, 15 years ago, we didn’t have Wi-Fi. So we couldn’t really see everything that was going on like you could today. I mean, we didn’t have any investors until recently, DJing was a way for us to survive in order to pay and fund ourselves. So, as we grew, our fashion side grew also. Gildas worked for Daft Punk, so he knew about the music industry. And DJing alone was so boring, so it just happened to work out. It was much easier for us to work together, because we were a small company. Every day, we get reminded about where we started — the fashion and music industry 15 years ago was changing and we felt that it would collapse. But because we loved the challenge of building clothes for everyday life and signing new artists. It was cool to be able to work with new artists and watch them grow. Doing clothes, music, it’s awesome to see where it’s taken us.”

This shared love of music withstanding, as the brand continued to grow, the partners would go on to divide and conquer, as Masaya brought more of his attention to designing and building the brand while Gildas continued to find new talent and grow their label.

“Sometimes we work on things together, Glidas will put together some collections and I’ll focus on retail development and stuff like that. You know, we just opened up a new store in front of the Shinjuku station. It’s crazy that we’re there now. It was very simple getting into the building surprisingly. So yeah, my way to talk to Japanese people has been pretty direct in a way. But sometimes we just have to because we don’t have the time to waste. We do the same things for our other developments as well.” 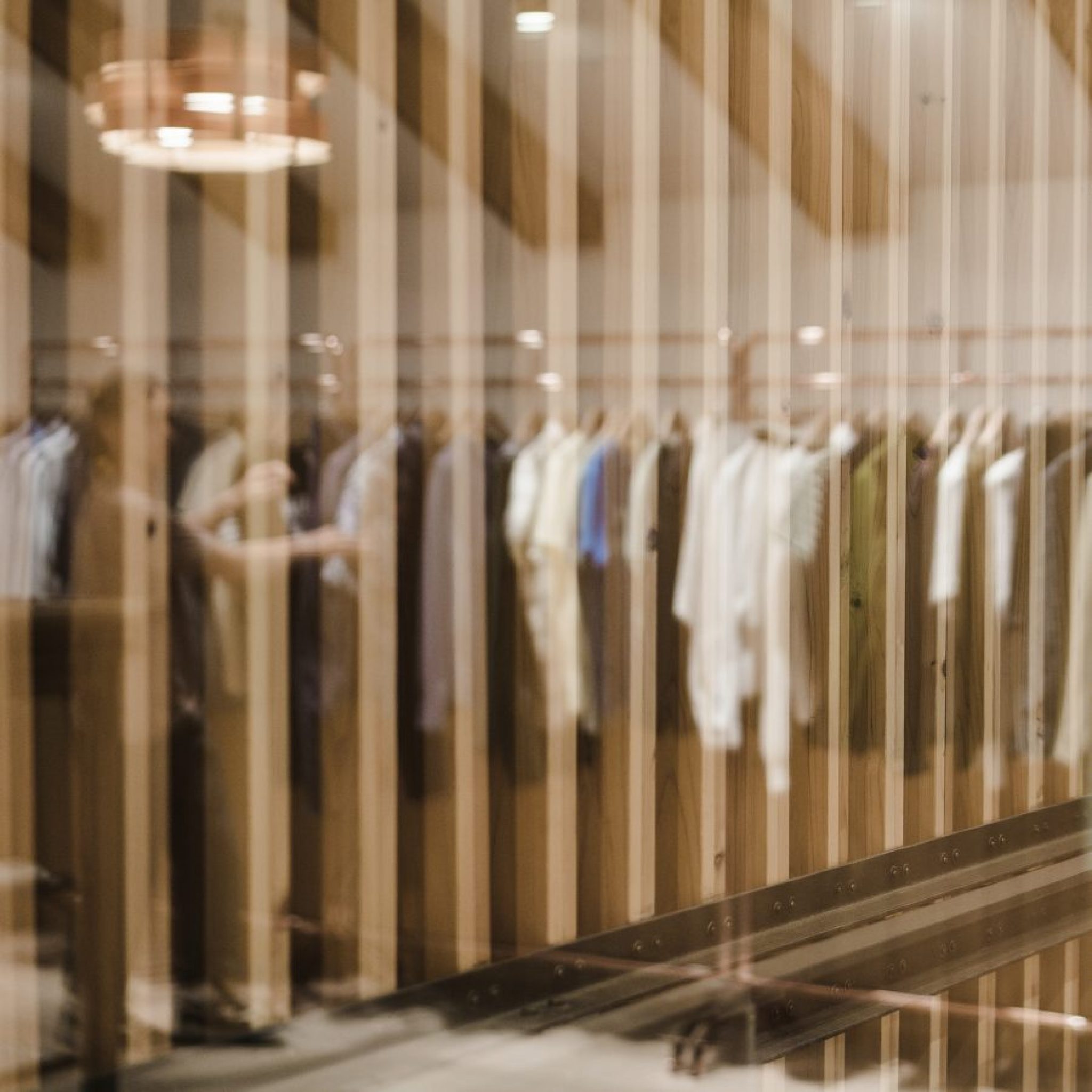 “We want to create a shopping experience and we want to give people the opportunity to see what we do, regardless of if they like it or not. And direct feedback is something that we can’t really get online. I’m old school.”

Much like how DJ-ing was about shaping the audio experience in response to the crowd on the dancefloor, Masaya stressed the importance of creating an experience for his customers just the same. While most brands have since abandoned brick-and-mortar to pursue online growth, he decided to go against the grain.

“You know when you watch online shopping, you know, it’s the best option, because it gives you the ability to buy and receive anything and everything, There’s no overhead, etc. But I still feel like when you sell product and you’re able to interact with customers in real-time, in a way — because I need to feel like I know that customers know what we are doing. We want to create a shopping experience and we want to give people the opportunity to see what we do, regardless of if they like it or not. And direct feedback is something that we can’t really get online. I’m old school.”

Despite his continued respect for old ways, Masaya hasn’t allowed his curiosity and sense of adventure to wane.

Was there something he was missing?

“You know; we’re getting a lot of offer for new opportunities. Something we’ve been thinking about lately are hotels. We want to do something different from CDG or RL. We want to be different. You know like in five years, I’d love to just do projects with friends. Just be able to do things that we want to do together. Obviously Asia, is big, but I don’t think Asians are into Parisian shit, so I want to bring that Parisian attitude to Asia. There so many existing Parisian brands like APC, etc. We want to capture a new market with our clothes that capture that Parisian attitude. There are so many places that we’ve yet to hit, so I’m excited for all the new places I can get into. It’s a good time to be in Asia right now, Asia is hot.”