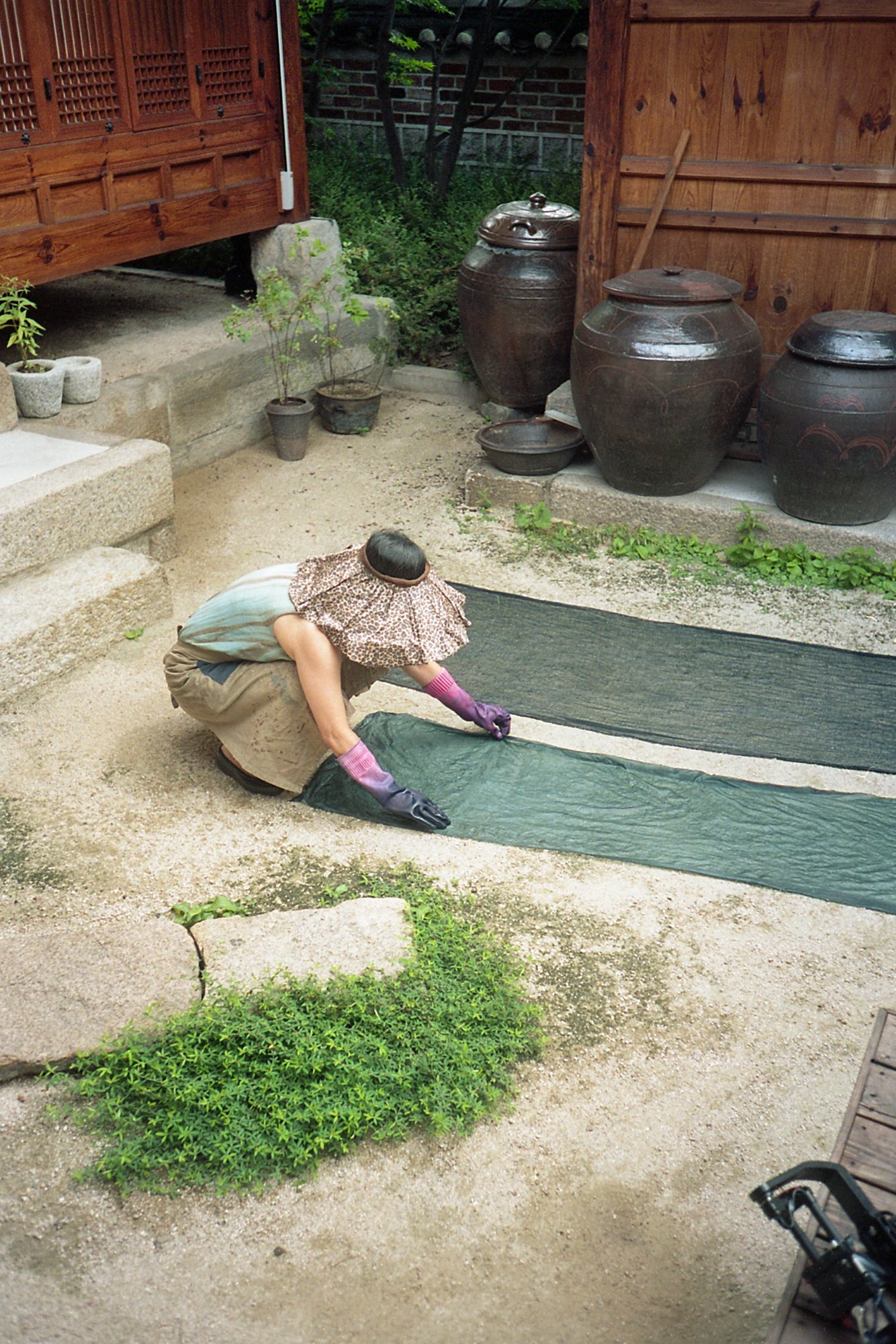 With Korean music, fashion, and entertainment leading modern trends in Asia, it seems counterintuitive to take a step in the opposite direction towards the country’s original sartorial past. With its collections that have been well received by old and young alike, IISE and its clothes are demonstrating how rediscovered traditional craftsmanship can still be very relevant, and still very ‘cool.’

Ms. Park, Korean traditional textile, and natural dye artisan, speaks on the neglected craft. Dating back to the 4th century, Korean ancestral dyeing techniques using natural organic resources such as plants, bark, and even insects were commonplace for everyday textiles all the way through mid-20th century Korea.

“You see, an initial persimmon dye allows for this deeper color of indigo.”

Rinsing several washes of dye from her raw silk scarf, Park elaborates on her duty to preserve this dying craft.

“It’s my responsibility to preserve and relay this tradition of Korean fashion—to show that this sort of natural dye can be contemporary.”

Today, it’s difficult to imagine tradition when it comes to Korean fashion or more currently, “K-fashion.”

An ancient process that includes several rinses of dye.

Of course, there’s a historical contrast between what people wear today and what they wore 1,500 years ago. But in the instance of Korea with sartorial roots that date back to 2333 BC, the transition only really started at the turn of the 20th century. Rampant efforts to industrialize post-war Korea romanticized the western lifestyle as an aspirational standard.

“During the ’60s and ’70s, Korea was becoming heavily industrialized—a lot of factories for mass production. I remember when plastic first came out. Everyone thought it was so modern, so cool. My grandmother, she traded in all of her hand-made ceramics for plastic. She thought they had become worthless compared to plastic.” — Jung Hee Kwon, senior editor of The Korea Times.

K-fashion ultimately was born from a standardized aesthetic and is even more perpetuated by Korea’s superior advances in digital technology. Steeped in both history and politics, this “K” represents the country’s struggle to earn a place in modern culture and with it, the accelerated evanescence of tradition fueled by burgeoning global relevance.

The Gwangjang Market is one of Korea’s first markets for traditional goods including foods and fabrics.

Korea’s lucrative positioning in fashion, music, and entertainment makes the country Asia’s current arbiter of cool. K-this, K-that. Everyone wants a piece of the “K” because it’s extremely reactive and on trend. Through its inimitable lead in Internet connectivity coupled with an insatiable hunger to be on top, Korea is considered super cool right now.

But is ‘cool’ all that matters?

Examining a recent Seoul Fashion Week, Susanna Lau a.k.a. Susie Bubble described the market’s derivative nature noting “the influence of Vetements already apparent” with “the drip-down effect of designer Demna Gvasalia…evident everywhere” throughout the main shows. On her visit to SFW’s previous season, International Vogue editor and acclaimed fashion critic Susan Menkes made various remarks of collections being “nice, but not much more,” “not much beyond surface interest,” and “not much to suggest an exceptional collection.” Instead, she noted the shows becoming lost in the bravado of presentation and K-Pop idols.

Driven by popular culture and lacking the patience for long-term brand incubation, K-fashion is where trends come to peak and die. Where today’s “new” just as quickly becomes yesterday’s “passé,” K-fashion can still be quite rudimentary in terms of brand identity.

On the flip-side, however, the country’s domestic apparel manufacturing is exceptional. A quick overview of Korea’s fashion industry records in the late 1910’s, when Joseon Textile Corporation and Kangsung Textiles established themselves, pioneering the first domestic industry of large-scale production with a cost-effective workforce. By the ’60s, corporations using mass-production appeared and flourished into a ready-to-wear industry for global brands to follow for decades.

Today, large-scale manufacturing has transitioned into a fast-fashion domestic wholesale trade industry. Known as the mecca for fast and cheap global fashion trends, the Dongdaemun area comprises about 30 wholesale malls. Each mall crams tens of thousands of retail booths with two to three designers that work through less than a week’s turnaround from planning to launch. Churning out mass-appeal designs to supply clothing stores throughout the country, Dongdaemun also supplies individual retailers from across China seeking “hot Spring items made in Korea.”

A portrait of Mr. Moon, a seasoned sample maker.

“I first started in the manufacturing business in 1974. I worked for a large company in Jongro. Back then Korea was big for large-scale production for global brands. We received the samples and made large amounts for a cheap price. By 1985, I came to Itaewon to make western clothing. Now, the industry has moved to smaller scale production.” — Mr. Moon, sample maker of 40 years.

Another asset unique to Korea’s transition into manufacturing is its system for small-scale production. Producing batches of 30 for a single-item domestic production makes for affordable and better quality turnaround for local brands. Eric Jennings of Saks Fifth Avenue notes his initial curiosity for Korean fashion triggered by the quality of production in Business of Fashion: “I was so impressed with the production of the Korean brands I was seeing in the tradeshows in New York and Europe.” Needless to say, the quality is there. And while Jeannie Lee of Selfridges finds there is a lot of new talent in Korea, she also adds “with that comes the need for a few seasons for the DNA of brand to really gel.”

I happen to work in fashion in Seoul, so I often get asked, “What are the coolest brands in Korea right now?”

In a market less rooted in brand individuality and design provenance, it’s a difficult question to answer. I could name a handful of Korean brands that are doing well in both domestic and international markets, but a brand with an interesting story—a brand with a rooted sense of identity—is harder to come by.

A showcase of IISE’s recent collection.

In 2013, Korean fashion brand IISE debuted their first leather bags and accessories collection. Marrying both trend and tradition, the Natural Dye Collection ’13 featured modern silhouettes of Korean natural dye silk and cotton blends with fine Italian leathers. A soft nod to the muted functionality of Korean Buddhist monk uniforms or seungbok, the Monk Sack stained with Korean persimmon, charcoal and indigo plant immediately distinguished the brand within what was a growing global bag industry in streetwear.

The courtyard of a traditional Korean hanok.

Seated cross-legged on the floor in her wood-framed, paper-paneled hanok or traditional Korean home (which doubles as her studio), Ms. Park elaborates her first introduction to IISE while showing me a variety of her dyed silk cotton blend fabrics:

“When they first approached me, I wanted to help. Because even though they are from abroad, they found interest in Korean tradition even more so than Korean people today. Koreans have grown up around it, so they don’t see it in the special way that [IISE] does. [IISE] could have easily made something just contemporary. But instead, they saw value in these things like natural dye, metal work… and went out of their way to explore and learn about it, and imagined it in a way that makes me think very highly of them.”

Improvised from the inherent pride in their mother culture, IISE was founded by two Korean-American brothers, Terrence and Kevin Kim. Having relocated to Seoul in 2011 after a short stint in Guangzhou, China, Terrence, and Kevin did not make the move with initial plans to launch a brand. Instead, a playful and genuine curiosity of their heritage prompted travel and cultural exploration throughout the peninsula over the next two years. Through study and exposure, IISE was born “dedicated to creating products with a street interpretation of Korean heritage.” Soon after meeting Ms. Park and learning the natural dye technique, the brothers began to experiment with ancient metalsmithing and architecture that would later be applied to their subsequent collections: Buffalo Lotus and Natural Dye ’14.

Two more collections after that and having gained steady recognition, IISE expanded the brand scope to contemporary menswear.

“It was the network we were building that encouraged us to expand into menswear. It was our connection with this old-school generation that shared with us tips on what fabrics we should look into or what sort of traditional painter was rad. They pass on knowledge that is becoming obsolete. ” — Terrence Kim, co-founder of IISE

A portrait of Mr. Park with his stockpile of various raw cotton fabrics.

Standing in Gwangjang Sijang, one of Korea’s oldest and largest open markets, a soft-spoken Mr. Park, one of IISE’s exclusive fabric vendors, looks at me timidly. It’s his first interview ever, and he appears to be about 65. Rubbing his fingers between layers of gwangmok, a fabric made of the purest raw cotton dating back to the Three Kingdoms period, he explains our surrounding history:

“This market was originally called Bae O Gae Market. After the Japanese seized Namdaemun market, a group of local investors came together and founded the Gwangjang Corporation. It was around the early 1900s. I think they bought this land for 100,000 won. It was originally the Bae O Gae market that only opened on occasions. They renamed it Dongdaemun Market, and it became the first market to stay open all week. Later it was renamed, Gwangjang Market.”

Kevin, IISE’s Creative and Design Director, flips through Mr. Park’s ancestral fabrics including mumyung, made of irregular cotton threads woven on a special loom, and gwangmok, made with raw cotton. IISE incorporates both into the brand’s menswear debut collection ‘001’ with the heavy twill nylon Coach Jacket lined with mumyung and the raw Korean silk Hanbok Jacket with a gwangmok inner lining. This blend of traditional materials with more modern silhouettes, along with additions such as traditional embroidery and architectural paneling have caught the attention of Korean and global consumers alike, including Mr. Park himself:

“These fabrics are for normal people. Not dyed and plain, even poor people wore it every day. It’s not special. It’s been used for so long that it’s just commonplace. With the mass production of synthetic fabrics, it’s harder to see these fabrics worn every day. To see it like this, it’s good. Very good.”

IISE is still relatively new to the game and is writing its story as it goes in a highly competitive industry, but Mr. Moon looks at me promisingly and chuckles, “These boys are going to make me rich!”