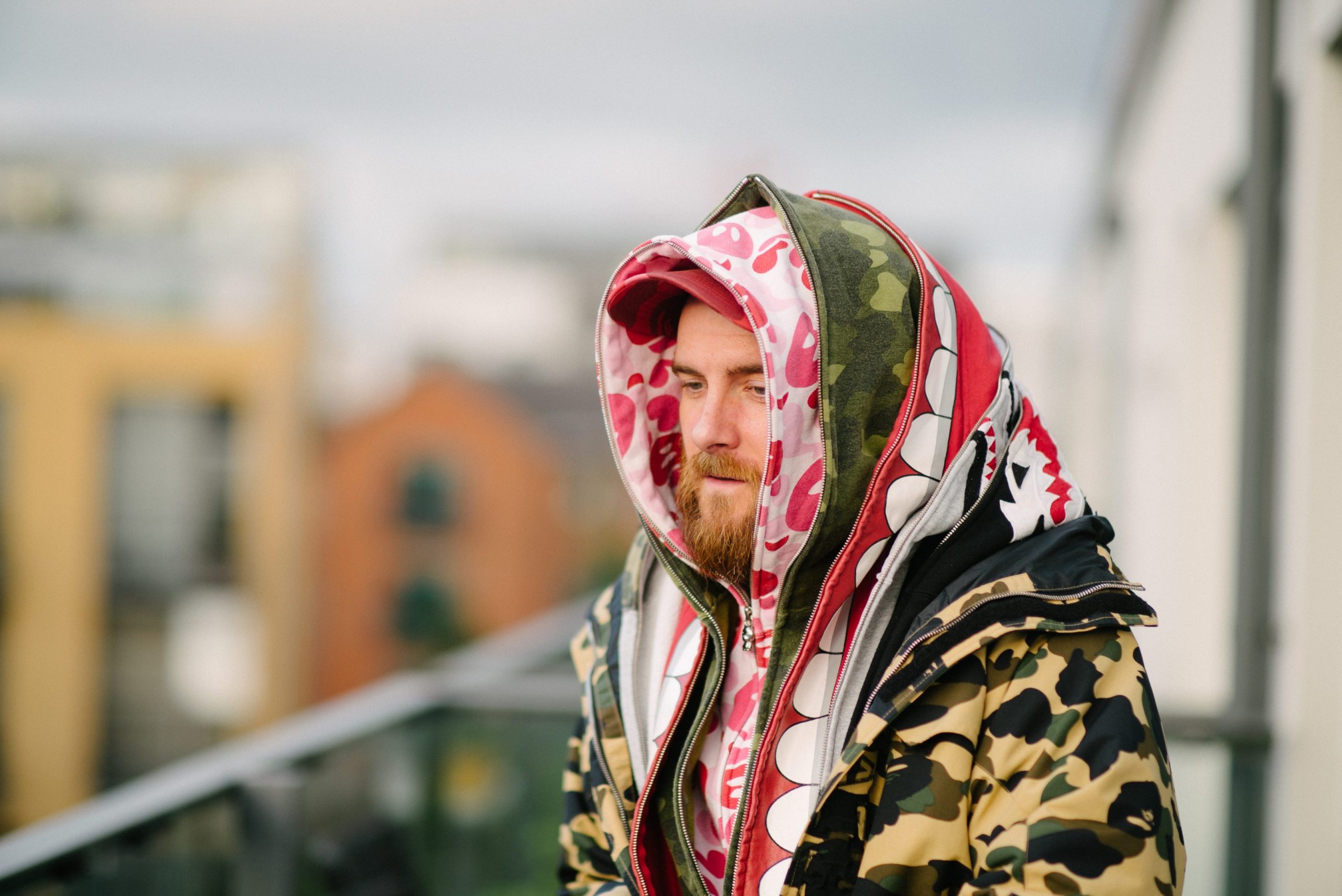 Logos are a snapshot into a brand and what it represents. When executed correctly, there’s an immense amount of meaning that one can associate with a logo. For photographer Neil Bedford, logos became sources of identity and confidence. His youth was spent watching football with his dad in Bradford which led him to develop his first taste of streetwear. In our youth, brands become an entry into our identity. Neil talks about how an obsession with logos and the brands they represent would later influence his photography and career down the line.

“Can we just talk about Tinder Dates?”

Neil Bedford is outspoken and brash, until you want to talk about his work. Since his youth, the London-based photographer has passionately latched onto hobbies and interests. His love of a certain Japanese streetwear line resulted in an unfortunate nickname, earned by dressing head-to-toe in the cult brand. Though the nickname has since passed, it doesn’t represent some mere fanboyish love for a single brand, but rather the far-reaching influences of brands throughout a person’s life.

For Bedford, the story starts back home in Bradford, England. There, his love of his hometown football club was the entry point into a life riddled with fanaticism. “For me it was never about the kit. It was about the logo. Our old logo was a boar and my dad’s golf club had a very similar boar,” he recalls. “It made me think, without knowing, of my dad. It could have been that.” Whereas the Bradford City Football Club logo represented a childhood connection to his father, others would enter the picture as he grew older.

Bedford’s admitted lack of style as a teenager pushed him to befriend Robin, a sales guy at a streetwear store in Leeds at the age of 18. “He looked miles better than I looked. I didn’t own jeans until 16. I wore tracksuits. I was only concerned with sports,” he says. “I remember seeing Robin and just thinking he looked great. You sort of recognize: ‘I don’t look very good and he does look good.’” One of the first brands he bought into was Stüssy, iconic for its simple script logo and whose brand reputation was disseminated through pre-social media word-of-mouth. Though the Internet existed, a comparatively short supply of knowledge meant that front line shop staff were, by circumstance, the knowledgeable gatekeepers to a given fashion scene.

Through that relationship, Bedford reached one of his most profound epiphanies at the time: “I realized you could shape your identity through what you wore.” Following Robin’s suggestion, he visited a store called The Hideout on a trip to London, where he was first introduced to A Bathing Ape, which Robin referred to as the “Japanese Stüssy.” But it wasn’t exactly love at first sight. For one, he was surprised by the price: “I saw the T-shirt; it was £45 GBP. I couldn’t get my head around it. I could get a Stüssy T-shirt for £25 GBP,” he recalls. “I could go back to Leeds and get two T-shirts for the same price. That put the brand in my head.”

A Bathing Ape would first captivate him through its iconic logo, a decidedly under-recognized reference to Planet of the Apes. “I was fixated on the BAPE Head. Sometimes you see something… and it’s not like love… I can still look at it and it’s got me. I think it’s an incredible logo,” he gushes. “I just wanted to be part of that. The logo would have been on the sleeve and I wanted every T-shirt.” The logo aside, it was the brand’s attention to detail—the thoughtful communication from the brand to consumer—that turned his appreciation into a quasi-obsession. From this early touchpoint of branding onward, A Bathing Ape would continue to captivate Neil.

Still, the brand’s exclusive nature made him uncomfortable wearing it. “I just didn’t think I was cool enough to be wearing the brand,” he admits. “When you talk about style, for it to be true and authentic, it has to be you. I don’t think BAPE was me, initially.” But with time, the brand grew on him and his collection grew accordingly. Before long, he says, “Everything I had was BAPE,” and he had earned himself the moniker “BAPE BOY.”

But how did he come to devote himself to a brand that at first intimidated him? As it turns out, the answer was coded into A Bathing Ape’s very designs. Hoodies have always been associated with subversiveness and secrecy, but they’re also a means of bolstering confidence in short supply. With the brand’s signature penchant for vibrant camo patterns and zippers that effectively seal off the front of the hood, they were all of those things for Bedford.

“You hide yourself behind something because you’re not very confident. You can hide behind a camo hoodie. To the right people the red camo hoodie was very important,” he explains. “I don’t like saying that, but I felt different wearing it.”

This idea of brands as a gateway to identity and confidence would follow Neil long after he outgrew his attachment to A Bathing Ape, especially as his love for the brand spread thin with its swelling ranks of new followers. As more and more people picked up the brand for its hype, Neil chose to emotionally distance himself in a way he describes as “like getting rid of a girlfriend you didn’t like.” And seemingly overnight, “BAPE BOY” was no more.

Still, his identity and BAPE were difficult to separate, and everything he had learned up to that point would find its way into his eventual career as a photographer. Neil’s often careful when speaking about his profession. There’s an underlying sense of insecurity. He simply hates talking about it. But despite his success and a sizable and highly respected client list, it almost didn’t happen. Neil’s inhibitions almost derailed his first opportunity.

“The first job I had with Nike, I almost called in sick. It’s quite a lot of money and it’s for a huge brand you respect. Literally you think why am I shooting this? You have to go back to that time when you were the most scared… I don’t like being a fraud. I don’t want to do myself an injustice. I didn’t have a story where I had a camera at the age of 6. I feel fraudulent but I love what I do.”

Interspersed between textbook symptoms of imposter syndrome, however, is an obsessive compulsion to improve his craft. “When I put images out, would certain people know I wasn’t a very good photographer? Would they comment on my lighting? I still struggle with it,” he says. “The obsession is the drive. There’s a want inside of me to be recognized as a photographer. I feel like I can give people strong imagery based on how I want to portray something.”

Though he doesn’t explicitly credit brands with building his eye for detail, his accounts of those that came in and out of his life suggest otherwise. It seems both he and those brands have been speaking the same visual language the whole time: that of artistic investment. He came to care deeply about something because someone cared deeply about it first, and the creative return on investment speaks for itself.

Can you obsess over things too much? For Bedford, unlikely. “You obsess over a black level of 10 or 11. It’s the tiniest margins of black. It doesn’t matter when it’s printed, it doesn’t matter on my screen or somebody else’s screen. I still like that level of attention to detail, even if it’s a detail no one other than me knows about. I have to feel like I’ve sat over it and thought about it.” To an outsider, it might be seen as “majoring in the minors,” but for photographers like Bedford and other creatives hellbent on becoming even half a percent better at what they do, the thousands of minute considerations, however mentally-taxing and stress-inducing, are all crucial.

“Attention to detail and obsession can only lead to success. It means you genuinely care about what you’re doing. In my case I obsess over my imagery, only to come back a year later to look at it and look at the mistakes. As you continue to obsess you’re learning, and you can see your mistakes.”

Neil shared with us three important bodies of works and items that have defined him as a person and a photographer over the course of his career. His moments captured in audio form range from personal work for Bradford City FC, commissioned work for Highsnobiety Magazine, as well one piece of A BATHING APE that influenced his perception of the Japanese brand.