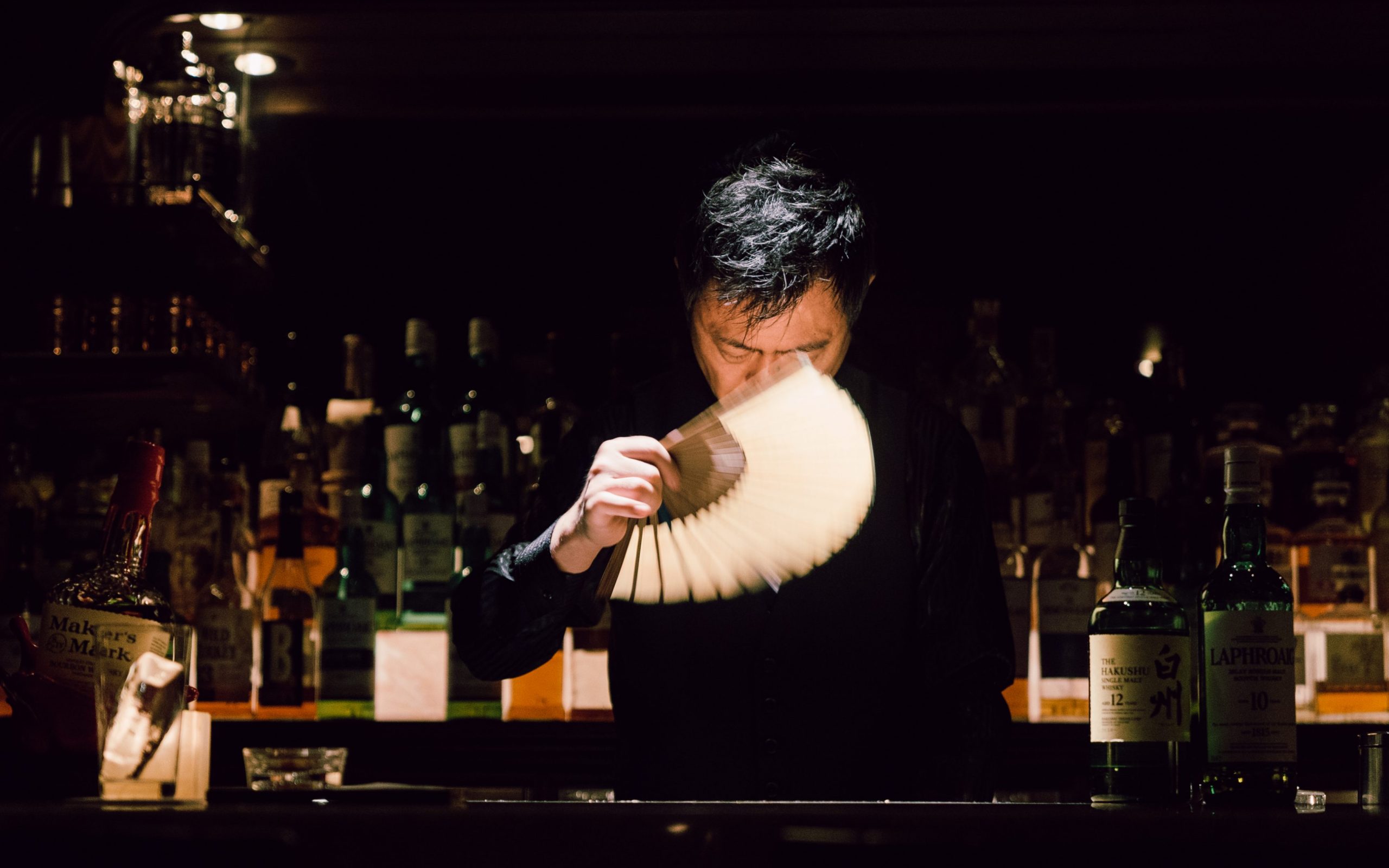 Apollo Bar — The Art of the Highball

Ice. Whisky. Soda. Spotlight? The popular Japanese cocktail known as the Whisky Highball and the ingredients that go into it don’t get much simpler. Some have taken a unique path for the drink such as Hidenori Komatsu, Owner of Tokyo-based speakeasy Apollo Bar. He’s elevated its preparation to a performance. But his intricate preparation has nothing to do with flashy movements or unadulterated showmanship, but rather, a commitment to craft and the guest he’s serving.

The spotlight goes up.

It bathes the counter in warm yellow light, but without disturbing the ambiance of the bar. The world outside seems to vanish, and it’s just one man at center stage.

For the next few minutes, all eyes are on Hidenori Komatsu, who will perform an act that is simple, but no less nuanced or perfected than any other show you might see.

He’s going to make a Whisky highball, a drink that we and many other guests will go on to order again and again that night. Most will do it for the simplicity and smooth texture of the drink, but all will do it because they want an encore.

It goes without saying that people will only get to understand Komatsu-san through his work at first. He’s a particularly private man, and we could only walk away with so much enlightenment from him on our first visit. But beverage director and fellow whisky geek Elliot Faber was gracious enough to share more about the place and the man.

“I know he was part of a large force of people who started working for them in the late ’70s. He was part of a whole growth working with izakaya selling products from beer to whisky, going to different bars and being all around the streets of Tokyo. From there, he climbed the ladder and found his own place more on the corporate side of Suntory like a lot of other people.”

Incidentally, as a Sake Samurai — an honor given only to the greatest producers and promoters of the traditional rice wine — Elliot’s no stranger to Tokyo’s food and beverage scene. Either with clients or solo, Elliot has paid more than a few visits to Apollo, Komatsu-san’s Ginza-based speakeasy.

Even in our buzzed state, we were left with many questions after our first trip to Apollo. It’s thanks to Elliot who began to fill in the blanks.

After several decades working for Suntory, Japan’s most well-known Whisky label, he retired to start Apollo, which opened on September 4, 2013. The space is cozy, dimly lit and intimate. The walls are replete with trinkets and memorabilia, and a short playlist of Tom Waits plays in the background. At the time of our visit, our crew of six filled a large chunk of the bar, but it never felt cramped or pretentious.

After, a few introductory words through our interpreter, we were eager to get in our first order of the fabled Whisky Highs Elliot had told us about.

The process of fanning the hand-carved ice blocks.

The first step is the trademark spotlight. Activated by a foot pedal installed behind the counter, he steps on it every time a drink order comes in. It doesn’t matter if there’s a dozen or more — like we ordered — or just one, the spotlight goes up.

On the surface, it seems to be an attention-grabbing act that is at odds with his welcoming but reserved nature, but for a different reason. He unobtrusively doesn’t speak to you unless spoken to first. But when the bright light shines down on him and his counter, the rest of the room turns to shadow. Everyone there takes notice of his craft and the dedication he puts into it for his guests.

He takes out a folding bamboo fan, opens it and vigorously sweeps air across the ice.

Once poured, Komatsu stirs the glass to cool the whisky around the ice.

A row of glasses awaits the soda water to complete the highball process.

The final step, Komatsu pours soda water into each glass.

He then adds that tall block of ice to an almost equally tall glass. He measures and pours the whisky from a jigger.

He tips in the soda and finishes the highball with a delicate single stir of the metal spoon to fuse the three ingredients together. It seemed deceptively simple, but our instincts reminded us there was probably a lot more to it.

Mastering one craft or even one technique was not something new to us, especially in the context of Japan. Japanese culture and society are still full of thriving craftspeople and artisans that will dedicate a lifetime to chasing a fleeting sense of perfection, no matter what the art and no matter how simple. What’s more is many Japanese have almost OCD-like attention to detail, whether it’s picking up one of their native cultural crafts or crafts from other cultures. Probably the most obvious example of this would be ramen. Originally a Chinese invention, it has become forever blended into Japanese food culture. Ramen shops are everywhere and the focus on serving only ramen—even just one variety —is common.

Japanese Whisky has seen a similar journey, deriving its primary inspiration from Scotch, malt or grain whisky produced in Scotland. Suntory, one of the country’s oldest liquor distributors and easily its most famous whisky maker, introduced the Highball as early as the ’50s.

But its greatest push came in 2008 as means to boost slowing sales by introducing the drink to a new crowd. For one, Suntory partnered with popular Japanese model and actress Koyuki on a series of TV spots to promote the Whisky high, the common Japanese name for a “Whisky highball.”

The idea was to change the mindset of the younger generation, who viewed Whisky as their grandpa’s bedtime drink. Much lighter in alcohol and easier to pair with food, the drink has since exploded in popularity. Bars dedicated to whisky have emerged, and some even serve just a blend of whisky soda on tap.

A side-by-side comparison of the difference in carbonation when the ice is fanned (right) versus without (left).

Of course, Komatsu-san does make and serve drinks other than the Whisky high, but it is overwhelmingly the most popular and the one he specializes in and for that, we were that much more intrigued by how intricate the process could be.

The show-starting power of the spotlight aside, each piece and step that goes into the process have an important part to play in the guest’s end experience.

The first implement is a tall glass that is distinct for its consistent thickness — or rather, its thinness. Inquiring about the glasses Komatsu-san uses, Elliot explained.

“[…] It’s the kind of thing that when you’re holding your highball after he’s added his spirit and his soda, you can just feel the glass. You can feel the ice moving around in its contained environment. You’re really sensitive to the movement, whereas in a normal glass you’re not.”

Sure enough, the ice entered the glass semi-opaque, and after his fanning, it developed a sheen on the surface and the Whisky that followed left the ice undisturbed. Incredulous, we wondered if the effect was that pronounced. He left no doubt when he brought over a second glass with ice without fanning it first. He poured soda over it and… a violent reaction proceeded to take place. The ice turned white and cracked right away, and the soda bubbled intensely, visibly disturbing the surface.

What’s more is that by keeping the ice at a temperature that wouldn’t shock it, we were left with a pristine surface that both kept the soda calm and the texture of the drink smooth. It also kept the drink just as simple aesthetically. We could only faintly see an outline of the ice block inside the gold-tinted cocktail, a pleasure for the eyes as much as the palate.

The highball was cold, smooth, refreshing and unashamedly addictive. At the time, we didn’t know what made each physical ingredient unique, but we noticed the care and time Komatsu-san spent on each step. He didn’t rush through any of the dozen-and-a-half we ordered for our crew and other guests over the course of the visit.

“It’s a big problem with ice balls. You can carve an ice ball, and then you put in the spirit, and it cracks the ice right away because of the change of temperature. I suspect fanning the ice is good for neutralizing the temperature on the surface of the ice at least so it doesn’t crack.”

Touch: a sensation that’s decidedly irrelevant in any other scenario where the glass merely serves to rush liquor down a waiting hatch. But for this venue, where it felt like someone’s bar rather than just any bar, there wasn’t any hurry to pound these back.

Quiet conversations backed by that Tom Waits in the background set the tone for slow sips and playful swirls of the glass.

The densely-frozen ice that provides that tactile feedback is carved ahead of time. But for each order, Komatsu-san lightly chips and tapers the corners down on one side for a snug fit inside the glass.

The next step, the fanning process, was the most visually unusual and unexpected, but like many elements of his craft, it isn’t done without good reason.

After corresponding with Komatsu-san, we were able to find out a little more about the other two key components: the soda and of course, the whisky.

The soda, for one, is a brand of mineral water distributed by Suntory that’s carbonated in-house by a special machine. Naturally, not all sodas are created alike, and some will pair better with certain whiskys. With that said, he recommended mild-flavored sodas that are soft in mineral content and that take the CO2 well.

As for the Whisky, we asked him what makes the best type for a highball. Like any art, it can be as simple or as complex as the artist and Komatsu-san admitted it was a hard question. He did say it was important for a highball to be refreshing, so a Whisky with a crisp green apple aroma like Glenfiddich would do well. Where a guest doesn’t specify a brand, the go-to is Teacher’s, a rich amber-colored Whisky with a robust maltiness that fades towards sweeter, fruitier flavors.

While the art can certainly be layered, Komatsu-san’s passion for it is simple. It’s the story of a man and his bar, his love for Whisky, and the desire to share it with his guests as long as he owns it. When we ordered, he was the one who made them, he was the one that served them to us and handled our payment.

As the person who started it, he runs it all by himself. If he’s not there, the bar isn’t open.

A stranger could wander through the doors, with the aim to have a quick drink and leave, without exchanging chit-chat with him and never knowing even his name.

But, the second someone orders a Whisky High or two, that stranger and the room will take notice.

When that spotlight goes up.